So long, 2018! On the running front, one of my more memorable experiences happened in July, when I was in New York City for business and spent days running to and around different parts of the city (in absolutely sweltering humidity). This is a photo of the 9/11 Memorial. I can't remember which tower this is, but the experience was powerful and deeply emotional, as you can imagine: 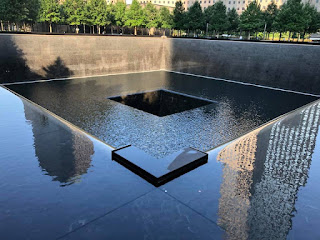 During my trip to NYC, I remember texting my wife that running is such a gift because it provides an easy way to explore and experience different places. Had I been in a car, there is no way I could have seen as much of NYC as I did on my own two feet!

Today, as I type this post, I'm feeling more and more motivated to finish a 100-miler in 2019. For me, success toward this goal requires three things:
Which brings me to the so-called "News Year's Resolution." Seems everyone is putting their resolution(s) out there today. Many of them are really inspiring! Anecdotally speaking, I'm seeing some old ultra friends who have been out of the sport a few years start talking about coming back into it. Love it!

It's not like I don't also have things I want to do in life, on the run and in work. I have lots of stuff I want to do in 2019, including getting my stress levels more stable. Stress, I think, has been a huge drag on my athletic performance over the past year. It's not "negative" stress per se. I've just got a lot on me and I need to learn to handle it better. A lot of that comes down to the choices I make. My choices need to revolve around 1) more simplicity and 2) greater clarity of purpose.

Anyway, whenever someone puts a resolution out there--and most resolutions are very outcome-oriented, e.g., "this is what I will achieve in 2019"--my question is always around process. The desired outcome is great, but what are the steps you will take to achieve it? If all there is to a resolution is an outcome, then how do you define progress toward the outcome? What are the daily actions, the milestones, and other indicators of success and/or need for tweaks to approach to achieve goal?

On my run this morning, I was thinking about the ultra community and basically how I've lost some of that special connection to it that I once felt. My connection to the community is still there; it's just not as strong as it used to be, and a lot of that is probably attributable to where I now am in life. I started running ultras in 2005, when I was in my very early 30s, and there are some things I definitely miss about the "good old days," namely:

1) Blogs. Back in the day, it seemed everyone running ultras had a blog and the universe of running blogs provided for great daily reading. Blogs I most loved to read included but were certainly not limited to those by Anton Krupicka, Karl Meltzer, Fast Eddy, AJW, Nick Clark and Geoff Roes. There are still some great blogs out there that are updated almost daily (examples here and here) but it seems blogging is no longer cool? I have also seen a trend where there has been more centralization of written "media" within the ultra world. It was a lot more fun back when everyone had their own blog and put their own content out there, on their own terms, on an almost daily basis. Those were fun days and I wish they'd return because ultimately we humans love great stories. This was once one of the more popular ultra blogs and I have let it tail off. Maybe I need to step up my content creation?

2) Anton. Anton, you made ultrarunning so damned interesting not only in your daily training and race performances but also in your blog. For those of you who have no clue what I'm talking about, here's one example of the epic content Anton would put out there when he was racing ultras and running 200 miles per week. He has a "new" blog that he still updates with awesome content but I miss his daily posts.

3) When Western States was the biggest race in the world. I still think many hold Western States to be the "Super Bowl of Ultrarunning," but I definitely think UTMB and Hardrock are gaining ground, which saddens me. UTMB is, in my view, overrated--the weather is almost always bad. Hardrock? Badass for sure. Call me old-fashioned but ultra is about running, not hiking, and Western States is a course that pits the best runners against each other. I realize people are gonna read this and get all fired up defending UTMB.

4) When the focus was on story-telling and not just showing, telling and impressing. I miss the stories shared via blogs, message boards and even the Ultralistserv. Nowadays it's just short-form content pushed out through social media accounts without much depth. A lot of it to me is all sizzle and no steak. I miss the steak.

5) When Runner's World magazine actually told good stories about ultrarunners. I have been a subscriber of RW for 15 years and this year may not renew. Its decline is saddening to me; the magazine to me now lacks soul and depth. It used to be RW put out some really interesting, albeit controversial, content on ultras, such as this article about Scott Jurek from 2010 (which pissed a lot of people off), that article about Rick Trujillo and his feud with Matt Carpenter from 2008 (again, which ruffled feathers), the infamous Dean piece from 2006 (which started a near civil war in my running club at the time) and several others. Back when RW actually had depth to it, it was a decent magazine that got people in the community talking. Nowadays it's mostly about pushing fluff and how-tos.

6) Marathon & Beyond magazine. The loss of M&B was, in my opinion, crushing. It put out such great content, such as this awesome article about Matt Carpenter. It was a very scholarly magazine that probed deeply into and geeked out on important topics.

7) When you could actually enter a race the day of. Back in the day, you could oftentimes show up on a Saturday morning and register for your race right then and there. No more. Nowadays, we have lotteries requiring contingency plans and advanced planning out the wazoo.

8) The (perceived) innocence of the sport. I'll be honest: I worry PEDs and cheating have infiltrated ultra in ways few want to imagine. Let me be clear: I have zero facts to back up this concern. And it could be the sport has always been infiltrated by PEDs and cheating. I really don't know. But I do know that it's very naïve to assume that people use PEDs only when money is on the line. I think ego is a much bigger driver of poor decisions than money.

9) When longevity trumped flashes in the pan. Ultra has always had epic talent come and go like the wind but it used to be that longevity was more appreciated than it is today. Rather than get all lathered up over who's crushing it here and now, I think true greatness is measured by longevity and that's why in my book the greats are those who excelled for years and years and actually trained in ways that sustained and built on excellence (e.g., Scott Jurek, Ann Trason, Yiannis Kouros, Tim Twietmeyer, Meghan Arbogast Laws, Darcy Piceu, Karl Meltzer and Hal Koerner to name a few).

10) When we were individuals, not brands. Seems today everyone has to have a brand and use social media to push it out. That's a really exhausting proposition, my friends. Brand ambassadorship has gone overboard. I get the power of brand. I really do. It's not like this blog wasn't at one time influenced by a desired personal "brand." I could easily be a brand ambassador now but why? Who cares what I like, use, etc.? I just miss the days when we were like-minded members of a cohesive community who enjoyed running a long way and didn't focus too much on pushing brands on each other.

Don't get me wrong. It's not like I don't love some things going on today. I think we are in a golden age of ultra (and extreme sports) filmmaking (Billy Yang's work is exhibit A--quite possibly the most talented storyteller in the sport today). I think Ultrarunning Magazine is still a very strong curator of great content. We have awesome podcast shows, led by Ultrarunnerpodcast.com, Trail Runner Nation, Billy Yang's show, etc. And I think iRunFar's pre-race and race-day coverage of the major races, especially of Western States, is exceptional, though I'm not a fan of how it's now the home base for folks who I wish were blogging on their own platforms. Still so much to love. But there are things I miss and quite frankly wish would come back.