On Sunday, I lined up for the Rock 'n' Roll Denver 1/2 Marathon. I can't explain why, but I was pretty keyed up going into this race. That's a nice way of saying I felt nervous. Although 2016 has been an epic year in that I finally got my chance at Western States and earned my fifth big buckle at Leadville, my results have left me quite dissatisfied. So on Sunday, I felt nervous because deep down I wanted a result I could be happy with but I worried this race would bring more disappointment.

I actually considered skipping Sunday's race but, after pacing my son in a 5K on Saturday (he finished in 28 minutes!), I felt inspired to line up and give it a go. As a reminder to dig deep and go hard, I found my old Cleveland Southeast Running Club singlet and wore it on Sunday. It's hard to explain, but when I put that thing on my mentality changes and I want to go hard. I wore that singlet in some exciting races in my mid-30s, including a few of my sub-3-hour marathons and a 3:46 50K. Here's a photo of me in it at the 2008 Columbus Marathon, where I eked out a 2:59 on a blown-up hamstring: 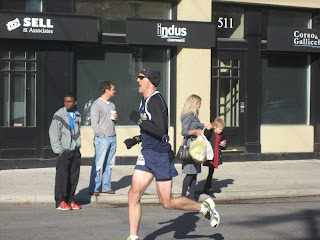 It's up for debate as to whether or not the course was a bit long. Some results from Strava showed that the course was anywhere from 13.1-13.4 miles. My watch read 13.3 miles. Whatever the case, I ran hard! My splits from the day were:

So, overall, pretty consistent. As I look at my result from Sunday, I am well-aware of the fact that I'm slowing down with age, though I also know that I wasn't really specifically trained for a fast 13.1 miles. My half-marathon PR is 1:22 but that was run at sea level. So I figure if Sunday's race were at sea level, the result might have been 1:25-1:26. Not a huge drop-off but I'm aging and that's OK because there's nothing I can do to stop it.

I really enjoyed going "fast" on Sunday. I have always loved the road and feel in my element when I'm pounding the pavement. Going fast on the road introduces a level of pain that's hard to achieve on the trail, unless it's up the backside of Hope Pass! By mile 10 on Sunday, I was fighting tooth and nail to maintain 6:35 pace and had to suck down a VFuel gel to hold it together. There is something about the anguish of holding pace in a road race that draws me in. In a race like a half-marathon or marathon, every second counts. I love that.

Rock 'n' Roll races are often the target of ridicule among "serious" runners. While some of the criticism may be warranted (especially criticism of the "sag wagon"), I really liked the energy of Sunday's race. There were runners of all abilities and a festive atmosphere from start to finish. The course was interesting, meandering through downtown Denver and through City Park and back downtown, well-marked and safe. The number of police officers securing intersections for safe passage by runners was impressive.

I have never been a huge believer in prediction calculators but I think Sunday's result indicates that I'm in about 3:03-3:04 shape for the marathon.
Posted by Wyatt Hornsby at 7:45 AM 1 comment:

Like a few other runners I know, I have yet to reach the place where my race plan for 2017 is crystal clear. And that's OK because we still have three months left in 2016 and I'm going to enjoy them!

I am still processing (and recovering from) my Western States/Leadville double summer and am now cramming for the Rock 'n' Roll Denver 1/2 Marathon in a few weeks. Obviously the endurance for a half-marathon is more than there. Right now, the emphasis is on building some speed so I can get it done in a decent time. Then it's ski season!

As with past years, as I look at the upcoming year, no one race has really jumped out and grabbed my attention. At this point, my thoughts are mostly focused on some specific goals I'm considering, including:
That's about it. I am also tossing around the idea of hiking the first 110 or so miles of the Colorado Trail over 3-4 days, likely in July. I love the idea of starting in Waterton Canyon and finishing at Copper Mountain Ski Resort and then over the next 3-5 years covering every inch of that epic trail. If I do the the Waterton to Copper Mountain stretch next July, I will want some company and, of course, I will need some very nice gear that doesn't weigh much at all.

I saw that the Leadville Race Series has released the date of the 2017 Leadville 100 run. I just can't seem to pull the trigger on committing to Leadville in 2017. Honestly, I think it's doubtful. I have five buckles and have decided that, if I line up for Leadville again, it'll be with the goal of getting that coveted 1,000-mile buckle. I'm just not ready to make that kind of commitment, so as of now Leadville in 2017 is fairly doubtful. That could change......

Looking back on my training for the Western States/Leadville double, I can definitely see where I fell short (what can I say? I am always analyzing). While pure running fitness/endurance and a positive attitude were there, what I really lacked was specific attention to big vertical. Simply put, I am putting in the miles but I need to spend more time on steep mountains going up and down. Hills aren't enough. We have a mountain not far from us (45 minutes)--Mount Morrison--that would have been perfect training for Western States as it's steep. When you have not done enough vertical in training, the vertical you encounter in a race will put a lot of stress on your body (and mind). That kind of stress can do a number on the stomach.

Looking back on Western States, I was so ill-prepared for those steep canyon descents and climbs in the middle portion of the race. The steepness of the descent into Deadwood Canyon was simply mind-blowing; it was almost like stepping off a cliff. The climb out of the canyon and into Devil's Thumb was no walk in the park, either. While I was in great shape to run 100 miles in the heat, I simply wasn't ready for that undulating course, and so it's no surprise that by Foresthill, where a puke fest ensued, the race had nearly broken me. I am amazed that I finished.

I'm not saying my stomach issues all go back to a lack of vertical in training; what I'm saying is that I feel I could improve my situation a bit if I did more steep vertical in training. It then becomes an issue of willingness.... Am I willing to devote the time to doing such vertical when I have other priorities in life?

During the Run Rabbit Run 100-miler a few weeks ago, I had a conversation with a very notable elite ultrarunner who has also battled raceday stomach issues over the past few years. When I told him that my stomach seems to give out on me after 50 miles, he replied, "You know what the answer is, right? Don't race more than 50 miles." That's what he's taken to doing, but I'm just not quite there yet.

This is always the time of year when I love to hear what others are thinking about in upcoming year. So do please chime in with your possible plans!
Posted by Wyatt Hornsby at 7:30 AM 2 comments: