"Many of the world's problems could be solved if we just ran trails together."
--Someone

One of the things about society today that is most troubling is our penchant for labeling people and creating divisions amongst ourselves based on things like skin color, ethnicity, sexual orientation, political affiliation, religion, etc. My experience as an ultrarunner is a big reason why all this labeling and dividing troubles me so deeply.

Last night, I sat down and read the most recent issue of Ultrarunning Magazine. It includes a gem of a column by none other than Errol “the Rocket” Jones. Errol has been a part of this sport for decades – since the early 1980s – and has seen it all, from the Western States Endurance Run and Badwater Ultramarathon to The Bear and many other iconic races. In his column, Errol chronicles the big changes that have taken place over the years (gear, nutrition, number of races, etc.), adding in the end that the one thing that hasn’t changed is the community aspect of the sport.

Almost any ultrarunner, especially those who have completed races of 100 miles or more, will tell you that the distance eventually strips you down to little more than the marrow of your very being. This would explain why at various times in races I can get emotional, especially when I think about my family. Sometimes I have long conversations with God. At that moment in time, you are a stripped-down, naked human soul moving over the land in pursuit of one goal: to finish. You’re surrounded by dozens or maybe hundreds of other runners involved in that same pursuit. When you have that kind of dynamic, all we see in each other are kindred spirits.

And when you have kindred spirits in nature, you have love, friendship and true community. This is why in our sport the best of the best will drink beer at the finish and trade war stories with the back-of-the-packers. In large part because of what we experience on the trail, we all know none of us is better than the other, whether you finished in first place or last place, whether you are black or white or some other “race,” whether you are from “here” or “there,” whether you prefer the opposite sex or your own sex, whether you're a "conservative" or a "liberal," whether you're a doctor or a drifter living in the back of your truck. That stuff is immaterial on the trail—and it should be immaterial in life. Alas, it isn't that way in the real world; that stuff creates divisions in families, among friends and among strangers.

Because of the many powerful experiences I’ve had in races, over time I, like probabaly you and many other ultrarunners, stopped noticing skin color, sexual orientation, political beliefs, ethnicity, etc. and started focusing on what’s inside a person. Because we’re kindred spirits, we look out for each other; we help each other out, even if that means giving another a gel or half of one's water; we encourage each other, even if that's at 12,600 feet on Hope Pass. Even as many of us are out there to compete and achieve a given result, at the end of the day this is about like-minded folks enjoying nature together while puttting one foot in front of the other. When you have that, nothing else—not skin color, not sexual orientation, not politics and, in some cases, not even one's time—matters.

All that matters is that we’re in this together, doing something we all love.

If only that were the way of the world in which we live. We can only hope.

For more on Errol "the Rocket" Jones, check out this podcast.
Posted by Wyatt Hornsby at 7:35 AM 2 comments:

A lot of people have asked about my training, since I’m with a new coach. Without giving away too much info, here’s what I did last week:

That’s actually less quality than usual as I was still recovering from the Colorado Marathon last week and we decided to cut one quality session. Usually I do quality on Tuesday and Thursday, a long run on Saturday, and a long tempo run on Sunday. For example, this week (the week we’re in now), I’m doing track intervals on Tuesday, hill repeats on Thursday, a marathon-distance trail run on Saturday (24-28 miles), and a long tempo run on Sunday.

With 43 miles run over the past weekend alone, today is an off day. I’m not taking a step but may do some dynamic stretching tonight.

One thing I’m learning is that my focus is now on nailing my daily workouts and not on aggregate mileage as it used to be. In other words, I’m not paying attention to what my weekly mileage is or chasing numbers; I’m just trying to hit my workouts as they take a lot of focus and can be daunting at times. It wasn’t until Sunday that it hit me that I ran 82 miles for the week.

Another thing I’m learning is that you—and no one else—are your biggest obstacle to breaking through and stretching your limits. Not before Saturday had I ever done a training run beyond 30 miles, races notwithstanding. Over the past few years, my long runs have been in the 20-25 mile range. I’ve come to realize that’s too short. On Saturday, I stretched my limits. A training distance (33 miles) that had rattled my cage now seems doable.

And that’s not all. On the heels of Saturday’s 33-miler, never in a million years would I have attempted a 10-mile tempo run the next day. But my coach ordered it and I did it. It wasn’t easy, but after 5 miles things loosened up and I felt pretty good actually. It’s in workouts like these that you learn something about yourself. Today, as I rest and recover, I can look back on last week and know I put in a good one. And I'll feel the same way in a few weeks when I take a step-back week to recharge.

So far, all systems go.
Posted by Wyatt Hornsby at 7:25 AM 2 comments:

Colorado Marathon - Just Another Day at the Office

Wow, what a great race. It all starts with Fort Collins, a gem of a town nestled in Northern Colorado right up against the mountains. Less than an hour from Denver, Fort Collins is the home of Colorado State University and many other major employers. Rarely will you find a town with such a bustling urban area--mom and pop shops, restaurants galore, walkable areas, bike shops, boutiques (if you're into that stuff), cafes, great pubs, etc.

The race started at 6:30AM but we had to be at the buses by 4:30. The ride up into the canyons took about 45 minutes and was relaxing as I talked with a runner from Albuquerque. The gun went off on time--always a good thing. After the start, it's mostly downhill via canyon roads for the first 16 or so miles, and then the course levels off, with a few little hills here and there. The biggest hill is at mile 19 but it's not bad at all. The race starts at 6,100 feet and ends at a little over 5,000 feet. The weather was mostly nice. When I finished just past 9:30AM, the temperature was probably 70 degrees and the sky was fairly clear.

I ran a 3:04:19, finishing 28th overall out of 1,086 finishers and second among the masters. In the last six miles, my pace slowed from about 6:50 per mile to 7:25-7:30. I didn't blow up by any stretch and never at any time was I "in trouble"; I just slowed down. I'm not sure why that happened because I did a good job of fueling; it just did. Fortunately, I kept running but at a slower pace and ultimately crossed the finish line proud of the result, especially given that I had not felt well all week and had a tweaked left lower calf. With a time that betters my Boston qualifier by more then 10 minutes, I am now virtually guaranteed a spot in Beantown next year if I decide to make the trek to the northeast (would be my third Boston).

Here's a photo my son took of me within a few steps of the finish this morning. 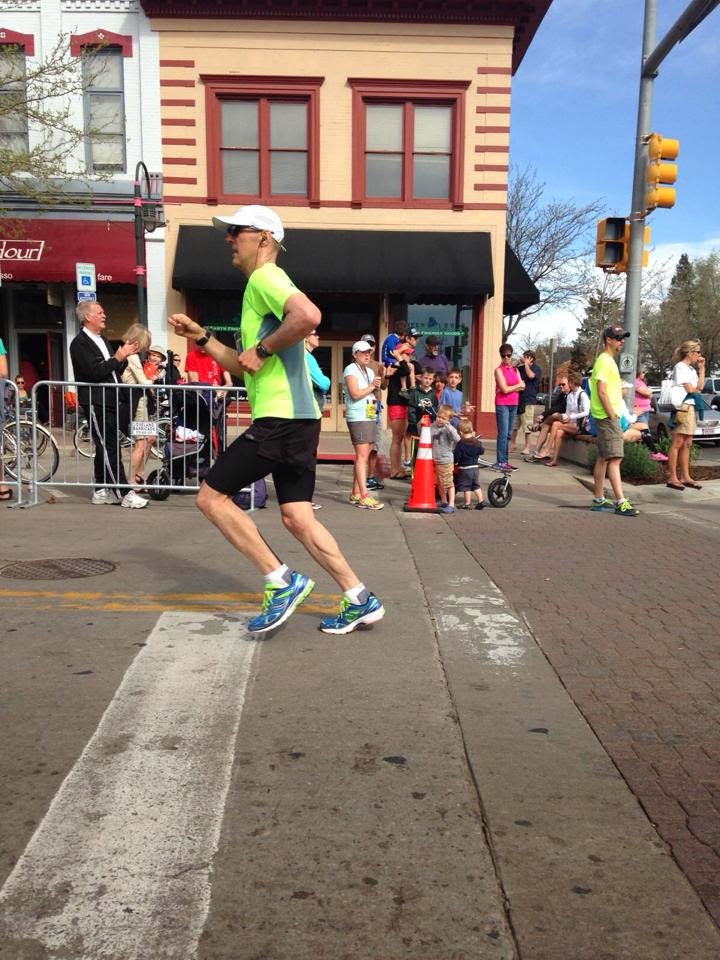 I'm still not convinced my days of sub-3s are over. I think I can break 3 again but it might have to be at a sea level race and it would need to be in the spring, when I'm fresh (versus the fall, when I'm usually a little hung over from the summer racing season).

This was my first race since last October--a 7-month layoff. I think it's really beneficial to take a true off-season. Too few runners these days take an off-season. It's the lack of an off-season, I think, that causes short "careers," burnout and chronic injury.