On the State of Ultrarunning

So this is going to ramble a bit. Accept it for what it is--a post that goes in many directions: PEDs, "Gordygate," etc.

It's hard to believe that this blog launched some nine years ago. In the past probably two years, I've been challenged to think up good, compelling content for posts because--well, to be honest--I'm not sure writing about what I do with my running is all that important or interesting. In some respects, blogging about one's self seems kind of narcissistic, and over the years the exercise has made me increasingly uncomfortable. Then again, as a writer, I believe in the virtues of journaling. There are some journal-style running blogs out there that I read daily and find great interest in because, in my eyes, they have value in their content. So, what I ultimately tell myself when I'm questioning the value of this blog is that it's probably reaching at least one person in a positive way.

Speaking of this blog, when I started it, I was 34 years-old, had been running for about three years, and was on the cusp of my peak. I had two really good years by my own standards--2008 and 2009--where I mostly achieved my goals. This graphic from Ultrasignup tells some of the the story but not all of the story because it excludes races shorter than ultra distance. 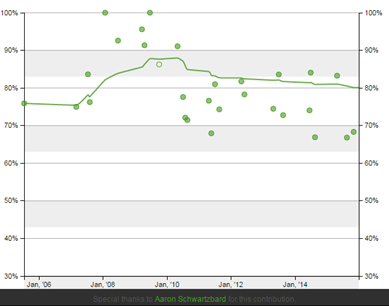 It's impossible to ignore the drop-off after 2009, when I stopped running sub-3-hour marathons (the sub-3 is in my mind the greatest indicator of my fitness level). I think the drop-off can be traced to at least three factors.

Second, my volume has dropped. I don't run 100-mile weeks anymore unless the time is there, which it rarely is.

Third, moving out West in early 2010, I started running in ultras with much deeper fields. My first big realization that the game was being played at a whole different level than what I'd experienced back East came in July 2010 when I ran in the Barr Trail Mountain Race, which goes part way up Pikes Peak and then back down. I ascended the trail just fine but then on the descent was passed by scores of runners who seemed to just float down the mountain. It was astonishing.

That was a long time ago. I'm now older, far more patient, and a bit more reflective. I've also made a ton of mistakes that proved to be great learning opportunities. The biggest lesson I've learned over the years is that, while I still do OK at shorter races like 5Ks and 10Ks, longer events are my friend and I have to run my own race. At Javelina, because I ran a smart race by my own standards, I passed a ton of runners in the final 25 or so miles. In ultras, it's not how you start; it's how you finish. The runner who's still running in those final 25 miles of a 100-miler will make up a ton of ground on most of the folks in front of him/her. This is where my plan for Western States in 2016 begins and ends--run smart from the start and finish strong. Details like strong quads late in the race and heat management in the canyons are tactics within the larger strategy.


So, now for some rambling. There's been a lot of talk about the state of ultrarunning. Two issues come to mind.

First, there's the "PED issue." PEDs in ultra have gotten some extra attention after the recent North Face 50-miler in San Fran, which included a known doper who'd served a ban, and Lance Armstrong's revelation that he wants to run an ultra. A lot of folks want a testing system. I would love to see testing and would gladly take part in it because I think there should be zero tolerance when it comes to PED use. You use PEDs and you're banned for life. Period.

But what is a PED and where does one draw the line? How come caffeine is OK when it's a known performance enhancer? What about ibuprofen? How about marijuana, which a growing number of ultrarunners use in training and racing as it can help ease stomach distress and promote appetite? Where do we draw the line? If we want PEDs out of ultra, then we might need to say no to all of them, not some of them. Something to consider?

But it's next to impossible to implement such a system in ultra when there's no governing body and when races are very grassroots in terms of their organization (in most cases, it's a lone RD who already has a full-time job but somehow finds the time to get the necessary permits and round up volunteers to make a race happen). To do good testing, you need a unified system that allows for a central repository of test results. You also need enforcement. This wouldn't be cheap. With that said, the issue of testing seems to be a non-starter since you have a sport that's so grassroots and unstructured. As of now, it's a dog that won't hunt.

Bottom line: A system for PED testing will likely never come to ultra unless some big sponsors make it happen. We have to self-police as best as we can.

Second, there's the Gordy Ainsleigh situation, which could be called "Gordygate." Gordy, as many of us know, started the Western States Endurance Run and is essentially the founder of the 100-mile trail race. He is not really the founder of modern-day ultrarunning; we can give that distinction to Ted Corbitt. But there is no denying that Gordy has made a huge impact as a pioneer. When I saw him at Javelina, I thanked him for "making this happen" in the first place. Anyway, as the 2016 Western States approaches, Gordy faces the prospect of not being able to run in the race he founded. The reason is that he's not qualified (yet).

The Western States board, as I understand it, has said to Gordy that all he needs to do is finish a qualifier and he's in the 2016 race. He's not subject to the lottery; he'll always have a spot so long as he qualifies. They even extended his qualification window to include a few qualifiers in early 2016.

Interestingly, I know a lot of long-time ultrarunners, who could be called "old school," who think Gordy should have to qualify. I also know lots of newer ultrarunners who think Gordy should have a spot for life. Where you stand on the Gordy issue has little to do with how long you've been in ultra and probably more to do with your general outlook on life and maybe even your worldview.

In ultra, no one is better than another. Some of us may be faster than others but ultimately we're all equal. We love the stories of Scott Jurek, "back in the day," winning Western States in 15 hours and change and then hanging out at the track and congratulating all of the runners as they came in. We loved hearing that Rob Krar ran the last mile of the 2015 Western States with Gunhild Swanson, who finished the race with seconds to spare and, in the process, became the story of that race.

We love those stories because they speak to the essence of ultra: though we come from different places and have different perspectives, and though some of us are fleet-feeted while others of us are cut-off chasers, an ultra brings us all together as like-minded folks who enjoy running a long way. To give special privilege to some and not all goes against what ultra stands for.

Have a very happy New Year!
Posted by Wyatt Hornsby at 7:45 AM 3 comments:

A Ticket to Western States

On Saturday, my name was pulled in the Western States Endurance Run lottery. The invitation to run in the world's most prestigious 100-miler--the first 100-miler, the "Super Bowl of Ultrarunning," the "big dance"--is a dream come true. I have dreamt of running in Western States since I ran my first ultra a dozen years ago. It is honestly hard to believe this moment has finally come.

With a total of four tickets in the hopper on Saturday, I had a 14% chance of being selected. I had told my wife that, realistically, it would be 2019 or 2020 before I got in. By then, I'd have enough tickets to have a serious shot. But lady luck was on my side this year. When I saw my name pop up on the website, which was being updated real-time as entrants were selected on Saturday morning, I was in disbelief. It was a surreal moment. The first thing I did was call my wife. Was this really happening? Would I finally have my shot?

And to think that it almost didn't happen. I wasn't qualified for the 2016 running of the Western States Endurance Run until November 1, when I crossed the finish line at the Javelina Jundred. I went to Javelina with really one goal in mind: to stay qualified for Western States. In the process, I regained my confidence as a runner, after losing it at Bighorn, and now I've been handed the opportunity of a lifetime--a ticket to the "big dance."

Through all the growth ultrarunning has experienced in recent years, there have been a few constants. Among them: Western States remains THE iconic 100-miler in large part because it's set the standard. It is the gold standard, like Kona is for Ironman triathletes or Boston is for (us) marathoners.

Western States will be my big goal race for 2016. I intend to give it my best. Although it's hard to train the way I used to (from a time standpoint), I will throw everything I can at Western States, because that race deserves nothing short of one's best. I will need to be ready for the 41,000 feet of combined elevation change and those sweltering hot canyons. One can run ultras for years--even decades--and never get a chance to line up for Western States. This could be a once-in-a-lifetime opportunity, and I intend to take full advantage of it. I will soak it all up and, when it really gets tough, think about how good it'll feel to run that last little bit of the race on the Placer High School track in Auburn.

With a very solid base in place, training will begin in earnest in mid-February. It will consist of a healthy dose of volume, lots of downhill running, weights, hill repeats, heat training, as much trail work as I can get in, and some tempo efforts. Ski season will still be in swing then so I'll train hard on weekends we're not skiing--basically I'll be opportunistic. Then in early April, when ski season is behind us, I'll really crank it up.

I also intend to line up for Leadville in August, assuming my name is drawn in that lottery, too. The challenge of two iconic hundreds in one summer practically intoxicates me with excitement. The two races are separated by about eight weeks. Recovery between the events will be critical.

In due time, the details will be worked out. For now, I'm just elated beyond belief to have a ticket to one seriously bad-ass 100-miler. And I'm hoping to get back to Leadville for what will be a summer I'll never forget. Let's get it on.
Posted by Wyatt Hornsby at 8:01 PM 6 comments: