Running for the joy of running

This is one of my favorite times of year to run. While I always love running, it’s this time of year that I feel like I can run for the joy of running and am free of worrying about training for a particular race. Training comes on January 1. For now, I run for no other reason than the joy of covering distances in and around the Chagrin River valley and in areas near and far. 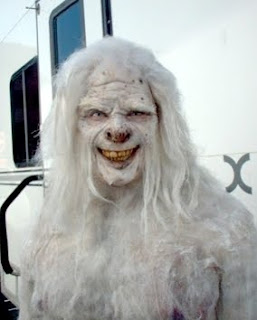 Embrace the abominable snowman deep within you!

There’s something very special about cold-weather running. When I wake up at 4:40 a.m. every day of the work week, I get into my cold-weather gear and go downstairs to check the temperature. This morning the thermometer read 20 degrees. I check the weather for myself when I let our dog, Sophie, out, making sure I’m dressing just right for the conditions. Then I down a cup of coffee and water and usually a slice of toast and put on my running jacket, hat, mittens/gloves, GPS watch, knee wrap, lights, Road ID, and other stuff before heading out the door. The first mile or so I’m usually pretty stiff and going slow. But then I loosen up and my pace increases. If it’s really cold, breathing can hurt. Sometimes my nose will go numb and my hands will get a little frigid. But there’s something so invigorating about running in the cold. I’m sure it’s the same way with cross-country skiing—an activity that I want to take up sooner or later.

A lot of people avoid the cold at all costs, staying indoors for basically the entire winter and working out in a gym unless they’re just hibernating. They’re missing out! So long as you have the right gear, running or walking outside during the winter months can be great fun. Just make sure you don’t wear cotton and don’t overdress! And if it’s icy or snowy, break out some YakTrax (which function like crampons) and burn up the road or trail! Be sure to wear a light so motorists can see you.

This week will mark my seventh consecutive week at 70+ miles as I remain in a low/moderate-mileage "holding pattern." I've found that 70 miles per week is just right for keeping in good shape and just on the threshold of very good but not excellent shape (excellent shape comes at 90 miles per week and championship shape at 100+ per week). I feel really good right now. My legs are strong and, except for some minor patella femoral pain in my left knee, all injuries from the North Coast 24-Hour are healed. My knee wrap keeps the problem at bay and eventually it'll go away. My leg turnover is back to normal. I'm strong on the trails again and have some extra kick I haven't had in a while. This past weekend I covered 13 miles on Saturday and 18.5 miles Sunday and it was easy. I'm just where I want to be.

The plan is still for me to implement some quality starting on January 1. For January, I’m going to hold the weekly mileage steady at about 70-75 and introduce tempo running and some intervals—mostly all on my treadmill as the roads this time of year (and for the next 3-4 months) are usually too icy to go really fast—as in 6:00-6:15 pace. In the spirit of what I wrote above, I’ll still do the vast majority of my running outside because that’s where it’s most enjoyable. Every month between now and June I’m going to add 10 miles per week as I build up to spring and summer races. So that would come out to 70s in January, 80s in February, 90s in March, racing in April as I plan to run the Boston Marathon, 100-110 in May, and still 100-110 in June when I plan to run the Mohican 100. I think that’s a good plan.

In my last post I feel like I didn’t adequately express how I look back on the North Coast 24-Hour, which was held on Oct. 3-4 here in Cleveland and served as the USATF 24-hour national championship. I think I came across as saying my result at the race was a disappointment and nothing more. 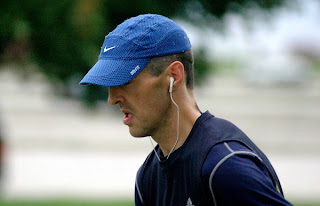 Me at my lowest point during the North Coast 24.

Yes, I was unhappy with the result (130.67 miles and ninth overall) and yes, I believe I underachieved that day. I think I left at least 5 and as many as 10 miles on the course and had a faulty approach to the race, focusing too much on my 100-mile split and too little on a strategy encompassing the entire 24 hours. I think in many respects I ran the first 100-110 miles by myself. After that, I was spent and really dug deep (as you can see in the photo), inspired by all the family members, fellow runners, co-workers, and other friends who were supporting me—to the tune of $2,500—in my efforts to raise money for Rainbow Babies & Children’s Hospital.

When things got the worst for me, I thought about the kids and families at Rainbow who were going through a much more difficult time than I was enduring on the North Coast 24 course. I could step off the course and quit at any time. The kids and families at Rainbow had no such option. So I ran and did my best, and in the process I managed to use a selfish endeavor (running) to do some good in the world. The North Coast 24 was an incredible experience—one I will never forget. Every year I’m going to make an effort to support a children’s charity through my running. Running can’t be about me—it needs to also be about helping others.

I'm now working on my fifth consecutive week of 70-plus miles. My leg turnover has returned. I'm able to power up the hills in the Chagrin Valley--hills that were kicking my ass in the days and weeks following the North Coast 24-Hour Endurance Run on Oct. 3-4. I haven't felt even a hint of discomfort in my once-ailing foot. Except for some minor aches in my hamstrings (what else is new?), I'm feeling mighty good and am primed for a big 2010.

So far, 2010 will include the Boston Marathon (already registered) in April and the Mohican Trail 100-Mile Run (comped) in June. I'm planning to run either the Buckeye Trail 50K (already registered) in mid-July or the Burning River 100 later that month. The 2010 BR100 will host the USATF 100-mile national championships and if I'm healthy from Mohican I'd like to join in on the action. Nothing stokes me more than a 100-miler.

Between now and then, I'm just going to enjoy running and train as hard as I can. For the rest of 2009--only about three more weeks--I'm avoiding anything really fast and am instead just training at about 7:15-7:45 pace. I did 21.4 miles a few Sundays ago and it was easy. I did 17.5 miles last Sunday and it felt like 5 miles. Time off from speed is really paying dividends. I feel very strong.

I'm also doing some cross-training and am continuing with my core strengthening. Every Monday I cycle on my indoor trainer for about 35 minutes and feel a nice burn in my lower quads--historically a weak spot for me that I plan to address this winter. Right now I'm not running at all on Mondays and thus on Tuesdays when I go for my first run of the week (my weeks are Monday-Sunday) I feel fresh as a daisy. I'll resume running seven days a week and will start upping the mileage come January 1 when my training for the Boston Marathon starts in ernest.

In terms of running, I think right now--as I log 70 miles a week and am enjoying a little extra leisure time that would otherwise be spent on a second run of the day--I'm exactly where I need to be. The goal is to be strong, fresh and well-rested by January 1, and then start amping it up to get ready for Boston. I may add a super-easy week somewhere between now and New Year's Day just for added effect.

One thing I've learned over the past few years is that what you're doing now will play a major role in what you do this summer. I'm emphasizing the enjoyment of running and not pushing myself too hard while still logging decent mileage and attempting to eat well.

The plan for Boston is simple--and it revolves around tempo runs and hills. No one approach works for everyone. For me, I've found that tempo running is critical. I'll be cranking out weekly tempo runs on my treadmill, unless Mother Nature allows me to go fast outdoors. I'm also going to do intervals but my treadmill maxes out at only 6:00/mile so going really fast will not be possible. I may try to get to an indoor track or club treadmill a few times to crank out 5:35s. We'll see. The plan revolves around tempo running and hills of the uphill and downhill varieties.

The hills will help me in Boston--and also at Mohican. Many may not know this, but Chagrin Falls is an amazing place to run and become a great hill runner. Everywhere you turn there's a long hill. I used to do zig-zags from Chagrin River Road up to Som Center Road/91 via the very hilly Jackson and Miles roads and will start doing that again soon.

Best race
Mohican 100--taking the lead at mile 86, not stopping at the mile-95 aid station and ultimately winning the race by 22 minutes.

Most surprising result
17:39 at the Aurora 5K. I was in much better shape than I'd thought.

Most fun race
This is tough, but I'd have to say the Lt. JC Stone 50K. This race was planned and executed flawlessly and I really enjoyed the whole experience.

Most frustrating race
Cleveland Marathon. I never got in a rythym and the wind really took a toll on me. I didn't have much in the bank when I crossed in 2:59:02.

Biggest disappointment
130.67 miles at the North Coast 24-Hour. I left at least 5 and maybe as many as 10 miles on that course. I had a meltdown in the early-morning hours of Sunday and was finally able to regroup after covering only about 2-3 miles in one hour.

Most rewarding race
Through the North Coast 24-Hour, I raced over $2,500 for University Hospitals Rainbow Babies & Children's Hospital to support its child-life programs. Rainbow cares for every child who enters its doors; no child is turned away. When the going really got rough at the NC24, I thought about all the kids and parents at Rainbow for whom I was running...and I found a way to keep going.

Single-worst moment
The last 7 hours of the North Coast 24-Hour were hell. I went to places in my soul I've never gone before--and hope never to revisit. I'm not sure when my next 24-hour will be, but at least I'll know what's coming.