Winfield to Twin Lakes (60.5): 13:28
Leaving Winfield, I quickly forgot about "Mary" and focused on the task at hand. Henry was a great guy and his energy and enthusiasm lifted my spirits as we made our way down the dusty, congested Winfield Road to the Hope Pass trailhead. Henry was wearing Vibram Five Fingers and spoke highly of them. He'd never done an ultra but was out there to experience Leadville and start building toward trying the race one day.

Even with Henry's unflinching moral support and cheery attitude, I struggled pretty badly on the 2,600-foot climb up the backside of Hope Pass. The first mile or so is brutal. There are some sections on that first crushingly difficult mile where the trail is at 30-40 degrees. I stopped a few times to rest, leaning against my poles. Henry was worried. It was hard getting into a rhythm as scores of runners were coming down the narrow trail en route to Winfield as we were making our way up with Winfield a few miles behind us. I was glad I was on the up and would soon have this section over and done with.

Once you're out of the wooded section of the Hope climb and reach treeline, the trail actually gets a little easier. It's still a damn-hard climb, but you're not at 30-40 degrees anymore. You have to negotiate some challenging switchbacks, a few nasty rocky sections where footing can be an issue, and of course the thin air--as well as the very real prospect of nasty afternoon weather such as hail, snow, high winds, and rain (none of which happened on Saturday). I suffered going up the backside of Hope and was elated to reach the summit. I told Henry that once at the summit I'd starting running again...slowly at first as my legs would be tight, but eventually we'd open up our stride a little and let gravity do the work on the 3,400-vertical foot descent. We stuck to the plan and cruised down Hope, stopping briefly at the Hopeless aid station to refuel. I managed to re-sprain my ankle again toward the bottom but it wasn't bad. This was my third right ankle sprain since my Pikes Peak summit in early June. There on Hope Pass, I quickly walked off the pain and we started running again within a minute or so of the injury. But I knew I'd now have to be extra careful with my ankle as I might not be able to walk off the next respraining. (As I write this report, my ankle and foot are quite swollen--I guess the sprain was worse than I thought.)


Once down Hope, Henry and I crossed the river and the many big "puddles" and made our way across the marshy meadow to the Twin Lakes aid station, where I'd come through nearly 6 hours/21 miles ago. In the meadow our conversation turned spiritual and we connected through our faith in a very moving way. My brother was out in the field with his phone, waiting on us. He called the crew back at the car to let them know we were close. I was so glad to see my big brother and knew he was proud of me. In a race like Leadville, seeing those you love at the aid stations really means a lot--more than words could describe. 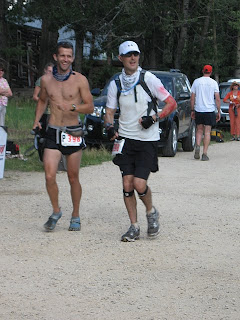 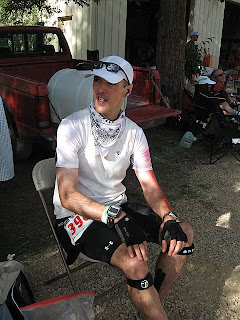 At Twin Lakes.
I was really motivated leaving Twin Lakes. I take pride in how I run the last 40 miles of a 100, which in my mind are when the race actually takes place. I was so motivated leaving Twin Lakes that I actually ran most of the steep connector spur up to the Colorado Trail, a stunt I quickly regretted. But--no worries--my legs rebounded and Lance and I hiked most of the ascent in those first few miles after Twin Lakes. On the flat and downhill sections, we ran, passing a few runners along the way. I felt strong and knew that if I continued like this I'd reel in many others and possibly move into the top 25. I'm usually at my strongest after 60 miles, and this was it--the race was now on. 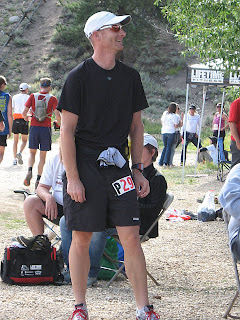 Lance at Twin Lakes waiting for me.
The farthest Lance had ever run was 26.2 miles (he's a 2:56 marathoner). In addition to being an outstanding master's marathoner, he's an accomplished mountain biker (sponsored by Trek) and has competed in a number of competitive races. Lance was concerned about being able to run 40 miles and so while we ran he got on his phone and managed to secure another pacer, his friend Maureen (a.k.a. Mo, whose runner had dropped). Mo would pick me up at the Fish Hatchery (76.5) and take me to Mayqueen (86.5), where Lance would then take me to the fnish. Sounded like a great plan.

Lance and I arrived at Halfmoon at 7:28 p.m. I had a great aid station stop, eating a number of orange slices and a cup of Ramen. I got my extra headlamp and we were out of the aid station in less than 3 minutes and on our way to Pipeline, where my mom and brother awaited us.

Halfmoon to Fish Hatchery (76.5): 17:18
Pipeline was three miles beyond Halfmoon and about four or so miles before the Fish Hatchery. By the time we arrived at Pipeline we'd turned on our headlamps. I was glad to see my mom and brother. They gave me my sleeves and vest, which I'd need with the falling temperature. Before we knew it, we were off to the Fish Hatchery with a beautiful, crisp, starry night falling over Leadville.

Although the stretch from Pipeline to the Fish Hatchery is fairly flat, I started to suffer a bit after Pipeline, though we continued running. Lance very skillfully found ways to motivate me if I stopped to walk. He'd tell me to run to the sign 1/2 mile up the road, and when we reached it he'd let me walk for a minute or so and then find another marker to get to. This routine sustained us on the long, dark road stretches into the hatchery. We saw an awesome sight in the silhouettes of Mount Elbert and Mount Massive, the two highest peaks in Colorado, right there in front of us. Finally, we reached the Fish Hatchery at 9:18 p.m.--17 hours into the race.

Fish Hatchery to May Queen (86.5): 20:47
At the Fish Hatchery, I was feeling pretty rough and could barely keep my food down. I gagged when I drank a Red Bull, which I'd asked my mom and brother to have for me when I arrived. My stomach was starting to turn on me, but I wasn't that worried. Mo was ready to go and had my trekking poles, which we'd need for the infamous Powerline climb. After about a 2-3-minute stop at the hatchery, she and I were off, making our way down the dirt driveway and turning onto the hilly road that leads to the Powerline turn.

The Red Bull quickly kicked in and I was talkative as Mo and I ran up the road. I was telling her all about my bout with plantar fasciitis and generally feeling good. She told me about her job as a PR consultant for the mining industry. We had a lot in common. Suddenly, a car came up behind us and the driver asked if we knew we'd gone off course. Panicked, I told Mo to find out where we missed the turn into Powerline and began running back down the road in the opposite direction. I was hauling ass, going sub-8:00 pace, which is pretty fast nearly 80 miles into a race. Mo eventually caught up and told me we'd gone a mile beyond the turn. I was devastated. Not only had I lost a lot of ground and a top-25 finish, but these two extra miles were going to beat the hell out of my legs right when I was about to enter the Powerline climb. "How could we have missed the turn?" I kept asking.

Well, finally we came upon the missed turn, and it was marked pretty badly. I later found out many runners missed this turn. We got on the trail and Mo handed me my trekking poles as we started the notorious Powerline climb. I kept thinking about the missed turn and was perplexed as to why the turn was so poorly marked. In Ohio, most of the trail races I ran in were marked with lime, plastic plates with arrows spray-painted on them, streamers, glow sticks, signs, etc. Leadville's markings consisted only of a limited number of streamers and glow sticks. It was easy to miss a turn on this course, and so attention and focus were critical.

A few months ago a Leadville vet had told me that, in his opinion, the "crux" of Leadville was Powerline and generally the stretch from Fish Hatchery to May Queen. I think he was right. This was a tough section. Powerline is a nasty, dirt trail ascent literally under powerlines leading into town. Erosion has caused the Powerline trail to be very uneven and treacherous in the dark. But that's not even the worst part. Powerline gives way to the climb up to Sugarloaf Pass at 11,100 feet. The climb took us about 75 minutes--a long, long time when you're that late in the race. We passed a few runners and a few passed us. When you looked down behind you, you could see a trail of runners making their way up Powerline. I remained quiet, silently freaking out. I couldn't come to grips with the fact that we were still some 18 miles from the finish. Plus, just when I had started to gain ground we'd missed a critical turn. I was devastated beyond words.

Finally, we reached the top of Sugarloaf and started the descent. We could see the lights of the Mayqueen aid station, but it was still a long way from us and by this point I was running very slowly and cautiously, not wanting to resprain my ankle on the rocky road. We watched the markings carefully and made the turn into the trail which eventually connects with the road into Mayqueen. It was a trail that would never end. My spirit sank even more. I felt like we'd never reach Mayqueen and that I'd never get to the finish. But ultimately we did reach the end of the trail, and there was Mayqueen on down the road. I'm sure Mo had moments of great concern for me--I wasn't feeling good at all. I wasn't feeling it.

My race nearly ended at Mayqueen.