My initial reaction to my result at the Leadville Trail 100-Mile Run, also known as "The Race Across the Sky," was one of relative disappointment. As a rather ambitious runner, I had set out to finish this race in less than 20 hours, which I knew might put me in the top 10. I knew that was an ambitious goal for a guy who'd lived at elevation for less than 5 months but I nonetheless aimed high with my expectations. Here's how the organizers describe the course:


The 50-mile out and back course is in the midst of the Colorado Rockies. Low point, 9,200 feet; high point is Hope Pass, 12,600 feet. Majority is on forest trails with some mountain roads. Pacers allowed after the 50-mile point (exceptions only by request).

Here's the elevation profile for the LT100 (click on the image for a larger view):

So basically for the full 100 miles you're running 2+ miles in the sky--hence "The Race Across the Sky."
Well, the sub-20-hour finish will have to wait for another year. In the meantime, I'll remain proud of the fact that I was one of only 98 runners among a field of over 700 starters who finished Leadville in under 25 hours (24:47/92nd overall), earning the very prestigious, sought-after LT100 gold and silver belt buckle and a lifetime of memories. Kind of like the tough-as-nails hard-rock miners who make Leadville great, in the LT100 you have to go through hell to get the gold and silver at the end.

Throughout the race, there were many sources of inspiration and motivation. I'll say more about my wife Anne and our son Noah, as well as my big brother and mom, who crewed for me, and also my pacers, Henry, Lance and Maureen (a.k.a. Mo), a little later. Here and now, though, I want to say how inspiring it was to hear some powerful words from Ken Chlouber, founder of the Leadville 100, during the pre-race meeting and pep rally. As Ken apparently says every year, "You're better than you think you are and can do more than you think you can!" Playing on Leadville's extraordinary mining history, he also told us to "dig deep" when it got tough during the race. Those may sound like platitudes, but when you're 86 miles into this insanely challenging race and very sick, those words start to mean something to you. More on that later.

My crew consisted of my mom and my brother Will, who flew in from Atlanta, as well as Anne who was with Noah. We stayed in a large cabin in Leadville with fellow LT100 runner Matt Curtis (27:47 finisher) and his family and friends. This was Matt's first 100-miler--pretty courageous, if you ask me. I've known Matt for literally 30 years. We ran cross country together and, in 1986, went to LA with our team, the Howard County Junior Striders, for the Junior Olympics (I didn't deserve to be there--such a crappy runner as a kid). His parents and my parents are dear friends. We now live only 25 minutes from each other and had gone on a few LT100 training runs together. It was great spending time with Matt and his family and friends. There were about a dozen of us in the cabin--a very large cabin located just outside of town near Turquoise Lake.

On race day morning, some members of Matt's crew, including his wife, Eileen, drove both Matt and me to the start at 6th and Harrison streets in downtown Leadville. It was in the 30s and the town was festive, as runners were everywhere. After checking in, Matt and I went to the front of the gathering pack awaiting the countdown. An electric atmosphere, to say the least. Finally, the shotgun blasted at 4:00 a.m. and we were off.

Start to Mayqueen (13.5): 2:00
I arrived at the Mayqueen aid station (13.5 miles) in exactly two hours, having navigated the fairly technical though mostly flat trail along Turquoise Lake while spending some time talking with Regis Shivers, Jr., who had also moved to Colorado from Ohio, and John Rice, both of whom I knew prior to the race. The trail along the lake had slowed me down a little as I'm still working to improve my trail skills. My goal for Mayqueen was around 1:50. I wasn't in the best of spirits when I arrived. My left foot, which had been hit hard by plantar fasciitis only three weeks before the race, was bothering me but fortunately it was stabilized and supported via KT Tape, which had made it feel so much better the week prior to the race. Entering Mayqueen, I was freaking out inside my head. The look on my face probably was not what my mom and brother wanted to see from me after they'd graciously traveled halfway across the country to help me. I spent less than a minute at Mayqueen and was off. Something about coming into Mayqueen and seeing my brother and mom waiting for me, with my stuff all arranged for me, was deeply touching. I knew I was in very good hands and decided that at the next aid station I'd try to be cheerier.

Mayqueen to Fish Hatchery (23.5): 3:49:45
The climb up from Mayqueen via Hagerman Pass really wasn't too bad and it was here that my left foot actually started feeling better. With incredibly beautiful elevated views of Turquoise Lake and a spectacular sunrise, I felt pretty good on Hagerman, and I continued to feel good going up the trail to the 11,100-foot Sugarloaf Pass. On the way down Sugarloaf and the Powerline descent I had decided that my foot was going to be okay and so would I! All of that said, during the Powerline descent I realized that climbing this bad boy 80something miles into the race--in the dark--on the return trip was going to be quite challenging. More on that later! 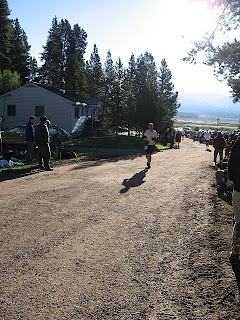 Coming into the Fish Hatchery.
After descending Powerline and running the road into the Fish Hatchery (23.5), I was again greeted by my mom and brother, who were happily with Anne and Noah at the aid station. I was so glad to see my family and, with my foot now just fine and the conditions perfect, my confidence was high. I told them not to worry about my foot--I was going to be okay and finish this sucker. 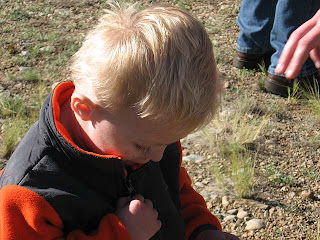 Noah at the Fish Hatchery.

Fish Hatchery to Halfmoon (30.5): 5:14
The stretch between the Fish Hatchery and Halfmoon (30.5) isn't too difficult. There are some hills, but overall this is one of the more tame stretches. Three miles before Halfmoon outbound you're allowed to access your crew at the Pipeline area, which provides ample parking for crews. Halfmoon was reconfigured a bit last year due to a nearby Blackhawk helicopter crash, and this year the race organizers mostly stuck with the reroute with one tweak--crews had to gather at Pipeline, not Treeline. All good. 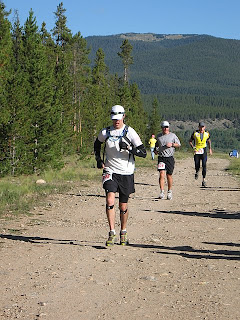 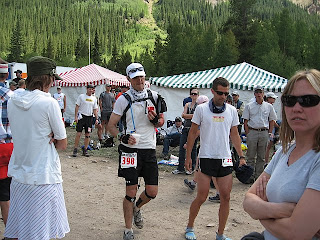 Leaving Winfield with Henry.
Was I pissed at "Mary"? For about 30 seconds I was pissed and had some choice words, but then I realized Henry was a million times the runner she was, and so I knew Henry was a better fit for me. But I was nonetheless shocked that a runner would bag a racer on the big day--the Leadville 100 no less. Somewhere in the unwritten rules of ultrarunning is the following commandment:
As a Pacer, Thou Shalt Never Abandon Thy Runner on Race Day. If Thou Feels Inadequate to the Task, Thou Shalt Allow the Runner to Drop You but Only After a Valiant Pacing Effort. Anything Less is Dishonorable.
...continue to Part II...
Posted by Wyatt Hornsby at 7:45 AM