Only if I'm bleeding from my eyes....

Last night my mom (who only wants what's best for me) advised me to take a few days off from running as I battle this wicked cold. I told her that I'd have to be bleeding from my eyes to take a day off from running. This dismayed her, as it would any loving mother. OK, so bleeding from my eyes is hyperbole. Only very occasionally, such as last Monday when I was whacked from going 31 miles the previous Saturday and 12 miles the next day, will I take a day off--and even then I hated doing it. A cold isn't going to stop me. 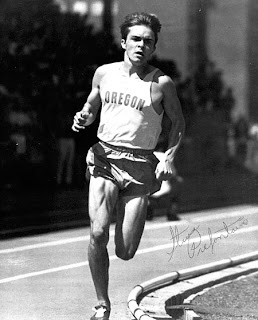 Would a cold have made Pre take a day off? I don't think so. We can all learn from his toughness.

As I've written on this blog before, runners run not because it's a choice, but because it's what we're programmed to do. It's simply in our DNA. Every runner I know feels the need to run every day and endures a hellish experience when they're injured and have to shut down. Shutting down is the last resort for a runner. Most runners run through sickness, pain and injuries.

When I put on my running shoes, my world becomes very simple and the taste of life sweetens. In an increasingly complex, nonsensical and distressing world, I long for the simplicity running provides every day. To not run is to deprive myself of an altogether therapeutic experience.

So it doesn't matter how stuffed up my nose is, how sore my throat may be or how congested my head may feel--I'm running! Just maybe not as fast and long as I'd like.....

Lately I've been feeling the desire to do some unorthodox things with my running. I'm not sure why.... Here's a list of running endeavors I'm considering after my fall marathon (more on that below):

I was seriously considering a trans-Ohio run this November, but the more I think of it the more I realize I'm pretty over-extended right now with the responsibilities of work and home and so I may have to postpone those plans until next year. We'll see.... Running from Cleveland to Wheeling (150 miles), though, would be much easier. I know the route I'd follow. It would probably take me two full days with one overnight stay.

Yesterday I registered for the Columbus Marathon. For me, Columbus is a very special race. It was my first marathon and I've run it every year since. Last year's Columbus marked my first serious attempt at a time of sub-3 and I failed in that attempt. On the heels of my 2:58 at this year's Cleveland Marathon, I will go into the Columbus Marathon looking to set a new PR in the range of 2:55 with consistent 6:40 miles to get me there.

To get there, my training is now pretty much entirely marathon-focused. I am on the track every Wednesday, completing a tempo run every Friday, and going long on Saturday (12+) and especially Sunday (18+). I wish I had more time to train--it's tough with a baby and all. But I'm finding that if I'm wise with my time, can endure a little less sleep, and am lucky, I can get in 70-80 miles per week. That should be enough to run a 2:55 at Columbus.

Columbus is kind of my nemesis. Except for the difference between my first- and second-year times, I haven't really seen much improvement there over the four years I've run Columbus. Here's how I've fared over the years:

Last year I ran a 1:28 in the first half, and then died the last 4 miles. Looking back on it, I still hadn't fully recovered from the Burning River 100. Hell, it wasn't until early October that I was finally able to get my mile repeat times back under 6 minutes--which has always been pretty easy for me.

This year I will look to run a 1:28 first half and 1:27 second half. This will not be easy. But I did run a negative split at Cleveland, so I think it's entirely doable if I'm feeling good that day and the weather cooperates. Those are big if's.

Posted by Wyatt Hornsby at 4:53 PM