Thinking about the Western States 100

The Western States 100 Mile Endurance Run has been on my mind lately. I'm not sure why. Maybe I've been thinking about it because, amid all the gloomy economic news of the past few months, my mind has needed to wander off to a place of retreat. And few places offer a better retreat than out West. I've only been out West a few times. I ran in the 1986 Junior Olympics in Los Angeles, and in October 2004 Anne and I visited the Tucson, Arizona area only a week after I completed my first marathon.

The West has long enraptured me. I think of the cowboys, pioneers, desert, mountains, canyons, forests, rivers and lakes. I think of the Pacific and of course I think of the trails. A big part of me wants to experience the West...day after day. The Grand Canyon is the place I most want to visit. I can't wait to see it with Anne and Noah, and hopefully I can run it rim-to-rim-to-rim one day--but only after the Western States 100.

The Run is conducted along the Western States Trail starting at Squaw Valley, California, and ending in Auburn, California, a total of 100 miles. The trail ascends from the Squaw Valley floor (elevation 6,200 feet) to Emigrant Pass (elevation 8,750 feet), a climb of 2,550 vertical feet in the first 4½ miles. From the pass, following the original trails used by the gold and silver miners of the 1850’s, runners travel west, climbing another 15,540 feet and descending 22,970 feet before reaching Auburn. Most of the trail passes through remote and rugged territory, accessible only to hikers, horses and helicopters. 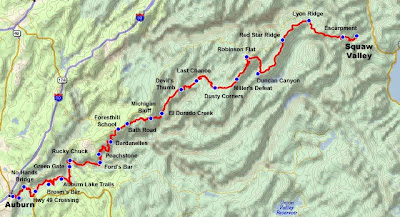 I've heard that you run the first 50 miles of the Western States 100 with your legs, and the last 50 with your mind. The race will beat your mind and body to a pulp. Run on mountains, in canyons and through temperatures of well over 100 degrees and as low as the 30s and 40s, the course knows no mercy. You find yourself crossing mighty rivers and crawling on all fours while sucking air in the high altitude. To guys and gals who live out West, the altitude may be of little consequence. To easterners like this Ohioian, it's a different story altogether. An altitude chamber might be a good training tool.

The Western States 100 has been a goal race for over a year--since I finished my first 100 miler last year (Burning River, 2007). With a strong second 100 miler (19:22/4th overall, Mohican, 2008) now under my belt and plans for a third (Mohican, 2009) solidly in place, I am on my way to preparing myself mentally and physically for the extraordinary challenges of the Western States 100. I respect the Western States 100 entirely too much to enter without having fully prepared myself for what it will invariably dish out. A finish in under 24 hours would be a huge accomplishment. Some of the toughest runners I know have struggled to finish in under 24 hours.

So my plan is now to apply for entrance into the Western States 100 starting with the 2010 race. The 2009 race is out of the question since the entrants from last year's canceled race have priority and so few slots will be open. I've already marked my calendar for the application deadline in the fall of 2009 and will have all the required materials submitted within the timeframe. I will then cross my fingers and hope for my name to be drawn in the lottery, which will take place in December of 2009. If accepted, training for the June race would immediately begin. If my name isn't drawn in the lottery, I'll find another 100 miler (Vermont maybe?) and apply for the 2011 Western States and won't stop until I'm given my chance.

Until then, my focus as a runner is now largely on preparing myself to run in the greatest 100-mile race in the world.
Posted by Wyatt Hornsby at 6:28 PM