Just when you think you might be a hardcore runner, think again. 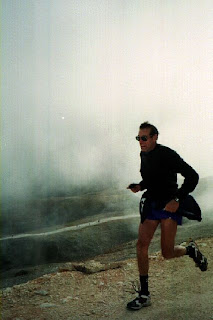 I stumbled across a feature article in the January issue of Runner's World ("Twilight of the Mountain God," by Steve Friedman) about the great Rick Trujillo (pictured above). Now 60 years old, Trujillo has run the Colorado Rocky Mountains for most of his life and is as old-school as they come. He founded the Imogene Pass Run, which goes from Ouray to Telluride, won the Hardrock 100 Mile Run (66,000 feet of ascent and descent with average elevation of 11,000 feet) in 1996 and is a 5-time champion of the Pikes Peak Marathon. The following quote from the RW feature will give you a good idea of what makes Trujillo tick:

"The mountains don't care! They'll wipe you out in an instant if you give them a chance. That's part of the appeal. There are times when I knew, if I didn't get down, it would kill me. And that's okay."

It's pretty clear from the article that personal relationships don't make him tick. In fact, he comes across as a total loner and doesn't hold back his contempt for Matt Carpenter, an elite mountain runner who owns many records and who, with his reported 90 VO2 max, Web site and PR machine, just doesn't get it, according to Trujillo. Trujillo says he doesn't even know his own resting heart rate, much less his VO2 max, and he couldn't care less about time, distance, records and other dumb stuff.

This man is so hardcore that even Dave Horton, who's run both the Appalachian Trail (in record time) and Pacific Crest Trail, is in awe.

My only beef with the article is that the author, Steve Friedman, doesn't mention Scott Jurek and Kyle Skaggs as elite mountain runners in the same league as Karl Meltzer and Carpenter. Jurek and Skaggs were pretty glaring omissions considering the fact that Jurek set the Hardrock record in 2007 only for Skaggs to set a new record in 2008 and in the process become the first person ever to break 24 hours on that horrifying difficult course--the ultrarunning performance of the year in my opinion.

Take a few minutes to read this well-written, inspiring and captivating feature of a true mountain running legend--Rick Trujillo.
Posted by Wyatt Hornsby at 6:31 PM