Movie Review: Into the Wild

Last night I watched the film, "Into the Wild." Released in 2007, "Into the Wild" was directed and written by Sean Penn and adapted from the critically acclaimed book by Jon Krakauer. The acting, screenplay, and cinematography are excellent. The story is compelling and deeply touching.

"Into the Wild" tells the tragic story of Christopher Johnson McCandless, played by Emile Hirsch. After graduating from Emory University, McCandless (February 12, 1968 – August 1992) sold off his possessions and ultimately became a wanderer, winding up in the Alaskan backcountry where he met an untimely death after nearly four months to himself. Calling himself "Alex Supertramp," he had entered the backcountry with little food and scant equipment, content with "living off the land." He chronicled his adventure in a journal and left a camera with several undeveloped pictures (some of which are in this blog post). His remains, weighing approximately 67 pounds, were found in an abandoned bus near Lake Wentitika Denali National Park and Preserve by some hunters. He had found the bus and made a shelter of it. 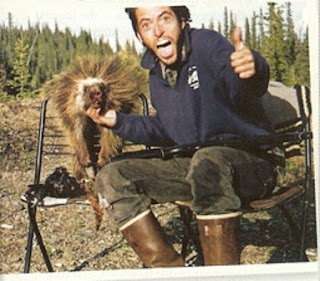 When he died, McCandless was known by no one except his family (who he had effectively cut off) and the few who he had crossed paths with during his trek. Today, he's viewed by many as a hero and modern-day Thoreau and his life story has been told in a best-selling book and major motion picture. (Only Chris, unlike Thoreau, doesn't seem to have been self-indulgent.)

There are many theories about McCandless. I'm only beginning to understand his story and the details of his life and death. Some say he was "crazy" or, at best, arrogant, misguided and just plain stupid. Some say he had a death wish and sought his own demise when he entered the unforgiving Alaskan backcountry. And yet others claim he was just an idealistic young man full of passion who was willing to take the great leap few of us would ever dare. Krakauer's book, Penn's film and other accounts have their own variations of what exactly happened. The net effect is that we're left with a story riddled with fill-in-the-blanks, but yet enthralling enough to capture our imaginations and force us to take a good, hard look at what it means to exist in today's world.
﻿
﻿McCandless' story really touches my heart for a variety of reasons. First, from what I've read about him, he seems to have been a genuinely good person. Unlike some, I do not believe he was "crazy." He believed deeply in truth and had faith and his drive and passion were incredibly strong. He found happiness in what he did. Indeed, his last message to the world before dying was, "I HAVE HAD A HAPPY LIFE AND THANK THE LORD. GOODBYE AND MAY GOD BLESS ALL!" Second, I understand his love of the outdoors. While I would never enter the backcountry without a compass, map and other essentials, as was the case with McCandless, I certainly admire his courageous passion for rugged adventure. Third, my heart breaks for his parents and family who only wanted the best for Chris. As a father, I want so badly for my son to live out his dreams, but there can sometimes be a fine line between pursuing your dreams and living recklessly. McCandless crossed this line and never lived to tell about it. His mom and dad live in anguish--their son effectively disappeared for a long time, was never heard from again and, little more than a skeleton, was found dead in a bus in the boonies of Alaska. Finally, there is something deep inside me that is so disenchanted with this world and just wants to disappear for a few months and live in the Colorado high country with my family.

McCandless was a history and anthropology major at Emory. I, too, majored in history, as well as political science. It's clear he, like Thoreau, was idealistic and disenchanted with the world. My suspicion is that, sometime while at Emory with law school looming, he took a look at the world and didn't like what he saw. Or maybe he had rejected the world much sooner than that and during the Emory years was just going through the motions. He couldn't bear the thought of being a working stiff, caught in the rat race and traffic jams so many of us are stuck now in. He knew he couldn't live in that world, and so he escaped. He burned his money (literally) and ditched all of his worldly possessions and hit the road. His dream was Alaska, and, by God, he was chasing that dream.

Few among us haven't been guided by idealism at one point in our lives. In college and graduate school, I saw the world through the lens of John Locke, Socrates and Lincoln. There were definitive moral lines that easily distinguished morality from license and defined the way forward. I saw the world not as it was, but as it should be, and I believed that truth was all I needed. I wanted not to be a high-priced lawyer, but rather a small-liberal arts college history professor who taught, researched and wrote for the love of knowledge and in pursuit of truth. I collected books, because I thirsted for knowledge even if it came from the dusty pages of a seemingly irrelevant, long-forgotten work.

And then one day the realities of life set in. I had a mortgage to pay, a future to plan, a job to worry about, an employer to whom I was accountable. It was the slow-boil effect. I landed in the real world still an idealistic young man. But, just as water can be boiled on low, life slowly, gradually distracted me from idealism to the point that living had become a daily grind. Before I knew it, hours I had spent at the library were now spent on the interstate commuting to and from work. Books about Lincoln or Socrates were now books about corporate success. Dollars I had spent on books were now spent at Jos. A. Bank on suits and ties. I look at my wife and our son and they're all I need to be happy. And yet existence today is rigged so that we spend more time in the grind of work than with those who matter most in our life.

McCandless, I believe, saw the grind in his future. He saw a world that would eventually consume his life and he rebelled against it. While most of us dream but never do, McCandless illegally rafted the Colorado River, traveled by hopping trains, hiked beautiful trails, touched the lives of virtually everyone he met and set off for Alaska to live his dream. Along the way, he held down a few jobs--one as a grain worker and the other as a burger flipper.

What exactly happened before his death we may never know. It appears McCandless reached the point where he was ready to leave, but was trapped by a raging river that he crossed only a few months earlier when it was still iced over. Unaware that the river was crossable only 1/4 of a mile upstream, McCandless decided to bide his time and live off the land a bit more, remaining stationed in Bus No. 42. Only he made the mistake of accidentally poisoning himself, rendering himself too weak to hike out or seek help beyond an SOS message on the bus where he stayed...and died.

We are left with our own vision and perception of McCandless--a story that speaks to the human condition and the calamity of modern-day life. Some day he was crazy. Others day he was idealistic and a hopeless dreamer. Labels and judgments abound. Me? I say he was Christopher Johnson McCandless, a man unlike any other today.
Posted by Wyatt Hornsby at 8:37 AM