Since my last post, I've learned a great deal not only about myself but also about running in Colorado. To say "learned" doesn't necessarily mean I've discovered some type of truth. It means I've gotten a better grasp of things out there.

First off, during the week of 5/3-5/9, I ran entirely too much on pavement, not getting to the trail once! That was 90 miles on the road, with a few miles here and there on the treadmill. A guy my age can't do that, as reflected in the fact that my knees were aching just a bit by the end of Sunday. But it was all for a good reason. Last weekend we celebrated Noah's second birthday and that--not running--was the priority, so I stayed close to home and ran on the roads.

After a week of just road running, I needed some trails. With that said, this past week (5/10-5/16), I planned some exposure to softer surfaces. Throughout the week, I went for dirt/gravel shoulders when it was safe to do so. On Saturday, I ran some dirt roads and dirt/gravel shoulders in and around Parker, logging 16 miles in exactly 2 hours on a pretty hilly course with strong gusts from the south. On Sunday, I capped off the week by venturing down to Manitou Springs to run with the famous Incline Club. I ended the week with 95 miles--not bad for my Leadville Trail 100 training. A few pictures from my adventure are included with this post. 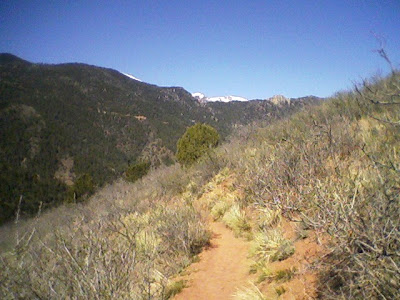 The Incline Club was co-founded in 1997 by Matt Carpenter, who many consider the top mountain runner in North America and maybe the world. Matt lives in Manitou Springs. Among his long list of achievements as described on his Web site (exact page here), he's won the Pikes Peak Marathon 10 times and is the record holder at the Leadville Trail 100. In 2008, he won the North Face Endurance Challenge Championship 50-Miler in San Francisco, beating a very strong field. You get the picture. Founded  by a guy who lives by the maxim, "Oxygen is overrated," the club has a motto of, "Go out hard; when it hurts speed up!" Here's how the Incline Club describes itself:


A group of nuts who meet most of the year for Sunday long runs on and around Pikes Peak. During the summer months we also meet on Thursday evenings for quality hill sessions. It is the only running club that is more exciting than water on the moon!!!

So on Sunday, I did the hour-long drive down to Manitou Springs, the beautiful home of the even more beautiful Pikes Peak, to meet the club at Memorial Park for the start of its 8 a.m. run. I got there a few minutes early and geared up, wearing my North Face fuel belt along with my Nathan handheld to ensure I remained properly hydrated. I also took some PowerBar gels and wore my fast, light and flexible Salomon Speedcross 2 trail shoes, which are hands-down the best trail shoes I've ever worn (Salomon, please do not ever discontinue the Speedcrosses. They are unparalleled!). The weather was beautiful--40s and 50s and sunny with little wind.

Anyway, I asked one of the Incline Club members about the route for the day and introduced myself. He was a nice guy, explaining that the single Waldo Canyon loop was about 3 hours and the double was about 4 hours. As I didn't have a limitless amount of time, I elected right then to do the single loop and decided I'd add on in the end if I needed more time and distance. Just before 8:00, Carpenter overviewed the route for the day and asked everyone to sign in (which I did--as a visitor), and we were off--a group of about 40-50. The run took us through the very charming Manitou Springs village and up the historic Ute Pass Trail. We stayed on the UPT, crossing highway 24, and then got on on the Waldo Canyon Trail which took us on a loop. Without reinventing the wheel, the run is described in detail here and I urge you to read the description as its full of great information. 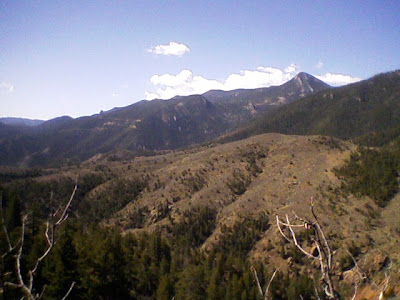 I covered 17 miles in 2:54, adding a short section on the Barr Trail leading up to Pikes Peak toward the end. The elevation for Sunday's run peaked at about 8,100 feet in Waldo Canyon. I felt mostly great the whole time, tiring a little in the end but holding up well. I wasn't ever out of breath and climbed the hills with good power and resolve. I hammered a lot of the descents on the "out" but my quads were pretty tired on the "back," and so I ran the descents a little more conservatively on the back. I ran for a while with some pretty fast guys and they were hammering the downhills and putting on an impressive show. They weren't ultrarunners; they described themselves as mountain runners. More on that below. Anyway, I had to stop and pee and they kept going hard (as they should) and I never was able to catch up with them. I ran a good portion of the "back" solo, finishing well ahead of many others. My total ascent and descent was 9,000 feet!

Yeah, running solo for so much of the time I was with the Incline Club on Sunday kind of sucked, but it was my fault. I went out aggressively, stayed toward the front and never joined up with others. Next time I may be a bit more social and stay with a larger group so I can meet some folks.

When I lived out East, I had mistakenly thought most mountain runners were also ultrarunners. Not so. While it's true there are mountain ultrarunners (as I'm on my way to being), mountain runners who aren't ultrarunners cover shorter distances and they tend to be fast. They have impressive abilities on the inclines and declines. Forgive the generalities--but these are just my limited observations to date. I am beginning to think that, as an ultrarunner, I might just be in the small minority of runners here in Colorado. As I get better-acclimated and know more people over time, maybe that observation will change.

I've learned that I have some abilities at altitude. I've adjusted well after a tough initial 2-3 weeks and am handling elevations of 8,000 feet quite well. I now want to venture above 8,000 feet and I think the perfect opportunity will be to participate in the Incline Club's Barr Camp out-and-back, which they'll hopefully do this Sunday. This route will take us up to Barr Camp, which is at 10,000 feet and more than half-way up Pikes Peak--and then we'll come back down. Here's a picture of an interesting sign that greets you at the base of Barr Trail--where you're so full of hope and optimism. 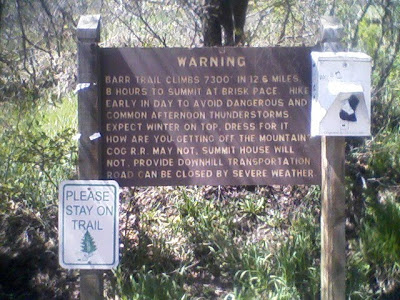 Pretty sobering, yes, as it should be. Pikes Peak is no joke; it is serious business. Given my obsession with the ever-mysterious Pikes Peak, you can only imagine how excited I am by the thought of running up to Barr Camp and back especially with the Incline Club. It will be very challenging as you running up a 14,000+ foot mountain! On down the road a bit, my planned summit of Pikes Peak will certainly be a life-changing event. I think it's fair to say I should allot an entire day to that challenge and pack my gear carefully! Barr Camp offers some provisions and over-night accommodations, but I have no plans of a multi-day adventure. It'll be one day--all in one go!

I am now thinking seriously about signing up for the Leadville Trail Marathon on 7/3. When/if I do, I'll blog on it! Until then, run hard and run happy!
Posted by Wyatt Hornsby at 7:43 AM