Last Sunday, Anne, Noah and I visited Pikes Peak, elevation 14,115 feet. Living in Parker, we can easily see Pikes Peak most days. I'm sure you could see it from many Denver-area communities. This is our view from Parker:

As you can see, Pikes Peak is a stunningly beautiful mountain. Anyway, on Sunday we all drove down to Maintou Springs and, after paying our $20, proceeded up the mountain. The road up is 19 miles long and, unfortunately, we were only able to complete 15 miles due to road closure from heavy snow at the summit. This put us well over 12,000 feet up. I can safely say I've never driven a more beautiful stretch of road.
The scenery throughout the ascent was so intense, so breath-taking and so moving that I can't put words to any of it. There were times the views were so intense that they terrified Noah. Unfortunately, we forgot our camera and so I don't have any photos from the adventure. I snapped a few shots with my mobile phone but the quality is too poor to post here. You can see tons of photos of Pikes Peak online. One of the highlights of the trip was seeing a fox. Another was watching the backcountry skiers. Here's the fox: 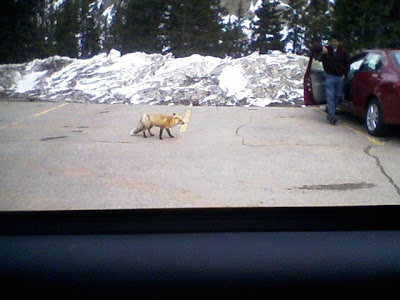 Having driven more than 3/4 of the way up Pikes Peak, I am now inspired to summit the mountain on foot via the Barr Trail. The Barr Trail is used for the famous Pikes Peak Marathon and Ascent, climbing 7,300 feet over a distance of 12.6 miles. About halfway up (10,000 feet) is Barr Camp, where runners and hikers can use the facilities, get some food and drink and even stay the night. From what I've heard, the key to summiting Pikes Peak is to start at about dawn so that you summit in early afternoon--before the weather turns nasty (a distinct possible much of the time). I think to truly experience Pikes Peak I'm going to need to run back down and do the full 25+ miles in one go. It promises to be an incredible experience. I will be sure to have my camera (along with a good day pack, lots of food and drink and other essentials)!

I'm starting to get an itch for ratcheting up my training and going for new goals. Next Saturday (May 1), I run in the Greenland Trail 50K, which isn't far from Colorado Springs. The course consists of multiple loops and has a maximum elevation of 7,400 feet. It's described as "fast." We'll see about that. I'm going to taper for a week and try to go for a "good" time, whatever that may be. This will be my first race of 2010 and so my expectations are pretty fluid.

Without getting too ahead of myself, I'm thinking about which 100-miler I'm going to enter this year. In my mind, there are two good options that I'm carefully weighing--the Burning River 100 in Northeast Ohio on July 31-Aug. 1 (my first 100 in 2007) and the Leadville Trail 100 in the Colorado Rocky Mountains on Aug. 21-22. The two races couldn't be more different.
For a variety of reasons, I'm leaning toward Leadville even as the prospect of a "homecoming" in Cleveland is very heart-warming. Now that we're here in Denver, I may as well take advantage of the mountains and experience one of the most famous 100-milers in the nation--even if it means a time of 24+ hours and having to do the 100 miles solo (though a Leadville race official told me if you want a pacer you'll get one). I'll report back on my decision. I could register for Leadville as early as today.

Regardless of which race I do, over the next few months I'll be logging 80-110 miles per week. I did 81 last week and am set to get to 90 this week. Such high mileage is going to be a huge challenge given the demands of a new job, but I'm simply going to have to find creative ways to get in the miles. Eighty miles a week is pretty "turn key" and standard for me. Getting beyond that requires some creative scheduling.

Coming to Denver, I'd only read what it was like running at elevation. Now I know what it's like and I haven't even gotten that high up yet. Just about everyday I do an out-and-back that takes me from about 5,900 feet to about 6,500 feet. All things considered, that's not too bad. In fact, it's very manageable. But it's also a great route for a guy like me who's trying to get acclimated. Anyway, here are some personal observations on running at elevations that I'd like to share:
According to this article in Running Times, the better shape you're in the harder it's going to be to go from sea level to elevation. Why? A well-conditioneed athlete uses blood oxygen very efficiently and simply doesn't need as much O2 as a less well-conditioned athlete. But when that well-conditioned athlete goes to elevation, there's a shortage of blood oxygen due to that sea level efficiency, and so it just takes time for the adjustmeent to happen. I'm pretty sure that's where I am now.

I'll report back on my Leadville/Burning River 100 decision.
Posted by Wyatt Hornsby at 7:50 AM