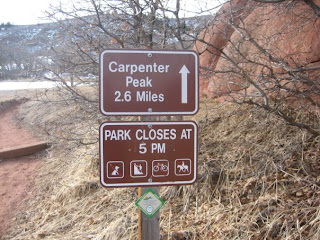 A sign to Carpenter Peak in Little, Colorado. Elevation 7,300 feet.

Beyond work, there is so much on my mind right now, and honestly I lost focus with my running and am only now regaining some sense of direction. That’s a good thing. It’s now February, the spring is approaching and I certainly want to be in super-good shape for a competitive racing season.

My schedule for 2010 is pretty up in the air. I’m still trying to figure out what races I’m going to run. I want to defend at the Mohican Trail 100 Mile Run but honestly the Burning River 100 Mile Endurance Run, which is hosting this year’s USATF 100-mile national championship, is alluring. Both are Ohio races and I know both courses well, but I know the BR100 course very well.

Despite a lack of focus these past few months, I’ve stayed on target with my mileage. I ran 70 miles per week throughout December and January and, with it now being February, have increased my output to 80 miles per week. Last week (1/25-1/31) I put in 81 miles and this week I’m projected to hit 85 miles. More importantly, I’m seeing great improvement in my weekly tempo runs and am doing my best with intervals despite treadmill speed limitations (maxes out at only 6:00/mile) and slick roads due to the snow and ice. I’ll stay in the 80s throughout February and then up the mileage to the 90s in March and—oh yes—100s in April, May, and beyond.

Last week we got back from a trip to Denver, where we visited with friends. Although we kept a very busy schedule, I did manage to get away for a little while on Sunday morning and run Carpenter Peak in Littleton’s Roxborough State Park—elevation 7,300 feet. That’s the highest elevation I’ve ever run and this was my first time in Denver or ever seeing the Colorado Rockies. The Rockies are spectacularly beautiful. I saw “rocky mountains” in Eastern Europe when I was an exchange student in college and I’ll never forget the site, but not since I saw the Colorado Rockies a few weeks ago have I seen such beauty. My Carpenter Peak run was a penultimate running experience for me. I had the time of my life and reaching the top—with its beautiful views—was an awesome experience. I’d love to someday get to the top of one of or many of Colorado’s 14,000-foot peaks. 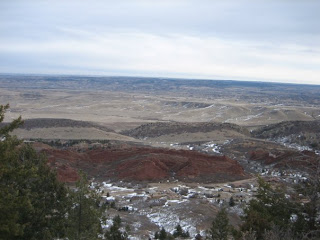 Making my way up to Carpenter Peak.

I’d always pictured Denver as a mountain city. In reality, the city itself is on relatively flat and in some places hilly land—albeit high-up land (5,000-6,000 feet)—with the mountains just west and to the south. They are always on the horizon. It’s an extraordinary site. I can't imagine what the early pioneers must have thought as they made their way across the plains--huffing and puffing from the high altitude--and then suddenly saw these gigantic mountains far off. "Damn, we have to get past those things--but how?" they must have said. In these mountains legendary races like the Leadville 100, Hardrock Hundred, Pike’s Peak Marathon, Imogene Pass and other events are run. I dream of running Leadville and Hardrock one day…and maybe Pike’s Peak and Imogene. Living at sea level as I do, those races are a tall order. 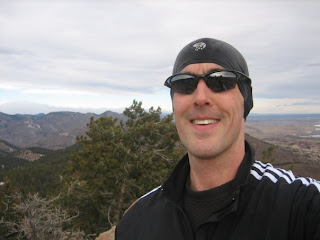 At the top of Carpenter Peak. The sites around me were beautiful.

I was quite sick the week before we visited Denver and managed only 41 miles. I missed three whole days of running (Monday, Tuesday and Wednesday). Puking 10 times and missing a night of sleep as a result of a violent stomach bug takes a toll on you. I’m over it now and honestly I think the three days of not running did my body some good. I felt great last week as I did 81 miles and so far this week I’m A-OK.

I now realize that it took me a long time to fully recover from the North Coast 24-Hour back in early October. There’s a rule in distance running that I used to doubt but now think may actually be true. For every mile of a race you run, factor in one day of recovery. As I did 131 miles at the NC24 on Oct. 3-4, that means I needed 131 days—or just over four months—to fully recover. I’m now almost at 131 days. My left knee is still not 100% but is much better. I didn’t realize until very recently, when I actually started to feel good again, just how messed up I was for so long after the 24-hour. The immediate effects of the race—skin and bones from the fat burn (I looked like Skeletor after the race—just ask my wife), a shut-down digestive tract, a week of indigestion, zero appetite for three days, off-the-charts tiredness, badly damaged feet and toes, and a totally messed-up knee, heel, and arch—were only a prelude of what was to come: a very beaten up body and soul and the threat of burn-out. I’m glad the damage is now behind me. All for the better; I am a 100-mile trail runner and marathoner anyway.

Now, for a closing thought. I’m not sure what came first: my belief in myself when the cards are down, or my love of ultrarunning. Did ultrarunning force me to believe in myself, or am I an ultrarunner because I believe in myself? It’s the chicken and egg argument. Anyone who’s put themselves out there and run a 100-miler or 24-hour or some other super-long race knows what it’s like to have run all day and night and faced down and ultimately overcome enormous doubt stemming from physical, emotional and spiritual anguish. As you shuffle along, the lights are off and you’re in a dark tunnel. The eyes of evil are fixed on you and demons are swirling around. In the face of such dread and despair, you believe in yourself and find strength from something far greater than yourself—God, in my case, but maybe something else in yours—and you prevail.

The finish line and the buckle are not only rewards for persevering, but also a reaffirmation of your own humanity and strength. If you’re a dedicated ultrarunner, you’ve experienced a level of living few ever have—voluntary suffering in the search of something deeply personal revealing the basest elements of humanity and a spiritual rebirth. An achievement many call extraordinary and super-human only makes you realize how human you are and a humble person at that.

Here’s to the greatest sport of all—ultrarunning.
Posted by Wyatt Hornsby at 7:30 AM