What next? And why comfort is over-rated

I can’t get my win at the Mohican Trail 100-Mile Run out of my mind. After a few days, it finally sunk in, but I don't really know what it means yet. Over the past several days, I’ve gotten e-mails and phone calls from folks congratulating me. I really appreciate this and am humbled by the whole experience. 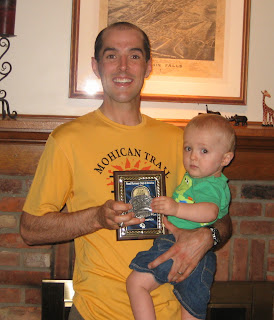 As part of tradition now, here Noah and I are holding the race hardware--my Mohican 100 buckle and winner's plaque. I also received a generous cash prize and am waiting a nice prize package from title sponsor The North Face, which is comping my entry into The North Face Endurance Challenge Championship, a 50-miler in San Francisco on Dec. 5. My status for that race is yet to be determined.

Here's one e-mail that really meant a lot to me:

Wyatt, this note is way overdue. I have wanted to let you know how impressed I am with not only your win but the way you trained for the 100 mile. You are a champion. I would have never thought that you would be completing, much less win, a 100 mile race when I first met you. I remember the call when you first moved here and thought you were like so many others that come and run once and never come back because they get intimidated. I believe SERC has helped you become a true competitor. Maybe that’s why SERC has not only the best runners in but we have national and even international class runners. SERC now has another elite runner in our club. You should be very proud.Congratulations, Wyatt.

To have taken the lead at mile 85 or 86 (still don’t know exactly where) and held off two excellent, accomplished runners in the end—Matt Aro of Minnesota and Mark Tanaka of California—provides me with a real sense of accomplishment.

When I reflect on how I was able to pull off the win late in the race, three thoughts come to mind. First, I just didn’t ever really stop. I walked only the big hills and, when I walked, I power-walked them hard—arms pumping and body upright. All other times I just ran, to quote Forest Gump. I think the hill repeats I was doing in the weeks leading up to Mohican really paid off. Second, I didn’t spend hardly any time at the aid stations. If I needed something, such as soup, either Kenny or Dan as my pacers (politely) yelled in my request as I was coming into the station, and then I took it from the volunteer (always thanking them) and was on my way. If I had to get something from my drop bag—shoes, headlamp, etc.—I retrieved the item(s) as quickly as possible. One-hundred mile trail races can be won by limiting time at aid stations. Easier said than done. You just want to sit down and rest.

Third, I wanted the win and was willing to put it all on the line to cross the finish first. Nothing was going to stop me. I think in this area--mental toughness, tenacity and competitiveness--I've learned a lot from guys like Mark and Steve Godale, Tim Clement and Kam Lee, all of whom I'm fortunate to run with in the Cleveland Southeast Running Club. These guys are true competitors who've won big races and won't be denied.
***
It's amazing to me how many non-runners I know who've congratulated me on the Mohican win didn't know it was even possible to run 100 miles. They tell me that the thought of 2 or 3 miles is horrifying enough and question whether it's really good for the body to go 100 miles. "People run 100 miles all the time," I tell them, citing the rising popularity of ultrarunning. I also tell them of the Tarahumara Indians of Mexico's Copper Canyons and other peoples around the world who cover extraordinary distances on foot as part of their daily life. "We were born to run great distances," I tell them.

It's not surprising most people think 26.2 miles is as far as the body can--or should--go. We live in a world of ever-increasing comfort. On a given summer day with the sun shining, the average American probably spends 22 of 24 hours inside breathing artificially cooled air--8 hours at work, 2 hours in the car, 8 hours of sleep and 4 hours in between watching TV, eating, working out in the gym, shopping, hanging out at Starbucks, playing video games, surfing the Web (which I'm guilty off now and then), etc.
The expectation is for the world to provide comfort. Comfort is almost a right now--up there with life, liberty and the pursuit of happiness. Can you imagine the founding fathers defining our God-given rights as the rights to life, liberty, the pursuit of happiness...and comfort? But comfort is over-rated. If you're comfortable all the time, how can you really discover what you're made of, push the limits and achieve great things? I think of Theodore Roosevelt's famous quote about the man in the arena. He puts himself in the arena, risking defeat, but at least he's put himself in a position to achieve victory and do great things. The man who neither knows victory nor defeat is the poorest of souls. That's basically what TR said, it's the motto by which we should all live.

As a guy who wears a suit and tie to the office, works at a desk, sits in meetings and breathes air-conditioned air every day from 8-5, I have to constantly work to keep myself from living a life that is too comfortable. It's good to get muddy, uncomfortable and primal now and then. Twenty-first century life wants to hold us back, to keep us down. We can't let it.

I guess it’s time to start thinking about what’s next on the race calendar, but the more immediate goal is to recover over the next few weeks. I'm going to ease back into running and not push things too hard right now, which means I won't be running in the Burning River 100 on August 1-2 and will instead once again pace Tim Clement. I’m fortunate to have gotten through Mohican without any injuries—just your usual fatigue and soreness—and now I need to get back to 100 percent so I can compete again. But, in the meantime, I want to decide on what will be my next race and start focusing on it.

There’s a 50-miler in West Virginia, the Cheat Mountain Moonshine Madness, on August 28-29 that looks interesting. It starts at night and traverses mountains near where I went to college. But I'm not sure I want my first 50-miler to be a night race and, besides, that weekend isn't looking good schedule-wise. The race I'm most leaning toward is the Tussey Mountainback 50-Mile in Central Pennsylvania, which will again host the USA Track & Field 50-mile national championship. Tussey has over 10,000 feet of climb and descent and is run mostly on dirst roads. To prepare for such a race, I'd need to emphasize speed and hills along with a steady high-mileage diet.

As an alternative to the Tussey Mountainback, there's the North Coast 24-Hour Endurance Run here in Cleveland on October 3-4. It’s hosting the 24-hour national championship. While running on a .9-mile paved loop for 24 hours doesn’t exactly appeal to me, I would love a shot at the national team but realize I’m not a big name and might not have a real shot at the team unless I won the damned thing (which I probably wouldn’t).

Farther out, there’s The North Face Endurance Challenge Championship, a very challenging 50-miler in San Francisco, on December 5. My Mohican win allows me to enter this race free-of-charge. I’m seriously considering it, but I want to find a race to do between now and then.

I know where I have the best shot at competing and it’s at the 100+ mile level. I don’t quite have the speed to be highly competitive at the 50K level. I’ve never done a true 50-miler and so I don’t know what kind of time I’d collect. We may find out soon enough when/if I run the Tussey Mountainback. Bottom line: I want to see what I can do and where I can go. Maybe somewhere. Maybe no where. But why not find out? It sure beats the hell out of being comfortable.
Posted by Wyatt Hornsby at 8:41 AM