Humility. There’s not enough of it in the world. Entering last year’s Mohican Trail 100-Mile Run, I knew I was in the best shape of my life. Despite a lack of sleep as we took care of then-6-week-old Noah and a beaten-up body after PR’ing at the Cleveland Marathon and hammering the Blossom Time run a week later, I kept plowing through 100-mile weeks with crazy thoughts of doing something special at Mohican.

On the morning of June 19, when the gun went off down at Mohican, I exploded out of the "gate" and ran hard. Really hard. Bob P., with the best of intentions, tried to reel me in.

I slowed down a little, but I was still going hard.

And then my left knee exploded at mile 60, when I was leading the race, and was obliterated by mile 80. While I hobbled along on my bad knee, two guys passed me who looked fresh as daisies. One of them was the eventual winner, whose marathon PR was/is 20 minutes faster than mine.

By mile 90 I was suffering from severe diarrhea and could barely walk because my left knee was so painful. Another guy passed me with three miles to go.

When you’re flying high and think you’re indestructible, nature has a funny way of pulling you back down in the most painful of ways. It’s one of life’s many blessings in disguise. You need a correction now and then; otherwise you stay on the wrong path.

With that said, in my mind it doesn’t matter how good I’m feeling or what I may think I can do. This time last year I was soring only to crash hard into the ground. I know how quickly things can turn bad. And so as I train hard for the Mohican 100 I know how fortunate I am to be running at what is a good level for me. All I’ll do is keep running and hoping for continued good health, especially during the 100. I finish when I finish, and my place is what it is.

Feeling as good as I do right now, it’s easy for me now to get sucked into going for a PR at the Cleveland Marathon. If a PR happens, that’s great. But I can’t get sidetracked or ignore the fact that marathons beat me up. All along the Mohican Trail 100 has been my focus, and it will continue to be my focus. Right now in the Southeast Running Club there are a lot guys talking it up about who’s going to run what at Cleveland. I said I might go for a 2:55 or better. No! Stay focused on Mohican and let what happens at Cleveland happen. There’s a time for marathon PRs and this isn’t the time for me. 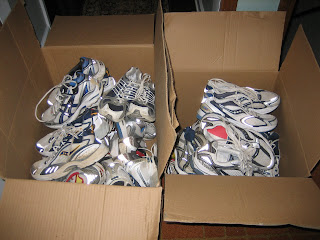 Last week I donated more than three-dozen pairs of running shoes to Easter Seals. They’d been piling up in the basement for a few years and needed to be put to good use. Getting rid of my running shoes was difficult and the fact that I finally did it surprised Anne. Shoes carry you to memories. But I didn’t need them anymore and was sure that plenty of folks living through tough times could use a pair of shoes—folks like the people who my dad occasionally visits under Atlanta highway bridges as part of his missionary work. So I boxed up my shoes and Easter Seals took them.

I kept just two pairs—the shoes my mom bought me for my first marathon (2004 Columbus, 3:22), and the shoes I wore at my first 100-miler (2007 Burning River, 21:08). I will also keep the lightweight trainers I wore when I finally broke 3 hours at the Cleveland Marathon last year, but they aren’t ready for retirement yet. Of all the shoes I own, my first-marathon and first-100 shoes mean more to me than any others.

If you have dozens of pairs of shoes that are just lying around, please consider donating them. I know Easter Seals would be happy to pick them up. All you have to do is call Easter Seals to let them know of your donation, box up your shoes, write in "Easter Seals" on the box and place the box outside for them to pick up.

This was probably the best week of training I’ve ever had. I set a new weekly record, with 108 miles, including good interval, hill and tempo workouts. I started the week feeling fresh as a daisy and ended the week feeling very strong, despite the mileage and 12 yards of mulch that I moved from Friday to Sunday. On Saturday down at South Chagrin Reservation I hammered the hills. There’s a 6-minute loop that I kept running back and forth. These aren’t huge hills but they’re good for repeats and they get the legs ready for a hilly 100. When and if the day comes that I’m accepted into the Western States 100, I’m going to have to find even bigger hills to try to get my legs in shape for the mountains and canyons of the Sierra Nevada region.

My goals this week are: