I just finished up Bart Yasso's new book, My Life on the Run: The Wit, Wisdom and Insights of a Road Racing Icon. This was a good book and an easy read full of excellent intentional comedy. Right now, with a baby, I don't have extended periods of time to read, so I need easy stuff like the Yasso book. He delivered in a big way and My Life on the Run will go down as one of the better running books ever written. 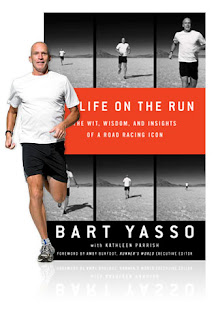 Yasso's book is somewhat biographical but mostly a compilation of stories divided into chapters--and good stories they are. He has traveled the world, running in races as far away as India. One story was about running in a nude race, another about running with a burro, and yet another about biking across the country. He also writes about his running the Badwater 146, where he placed in the top 3, and his ongoing battle with Lyme Disease, which essentially cost him his long-distance legs. And, of course, he writes extensively about the famed Yasso 800s. I think he came across as a little too full of himself in writing about Yasso 800s.

I didn't realize Yasso, who has worked for Runner's World magazine for a number of years and is considered the "Mayor of Running," was so good in his prime. He has some impressive accomplishments, such as winning a marathon and several solid finishes well under 2:50. He's the longtime race director of the Lehigh Valley Half Marathon in Allentown, Penn.

The best part of his book was in the end when he talked about how runners are very accepting and encourage each other. He wrote eloquently about the camaraderie of the sport and about how you won't find snobbery among runners. Well said, and words to live by.

I highly recommend Bart Yasso's My Life on the Run.

The best running book I've read to date: To the Edge: A Man, Death Valley and the Mystery of Endurance by Kirk Johnson, a New York Times reporter.

The second-best running book I've read to date: The Death Valley 300: Near Death and Resurrection on the World's Toughest Endurance Course, by Richard Benyo.

Will I ever learn?

After my knee injury at the Mohican 100--which was an over-training injury due to a crazy race schedule leading up to the 100--I wrote here that I would train smarter and place a greater emphasis on post-race recovery.

Yet the week after a hard effort at the Columbus Marathon, where I struggled with hamstring problems, I logged close to 60 miles, with two double-digit mileage runs. And the week after that (10/27-11-2) got to 80 mile with multiple two-a-day runs. It is no wonder that my legs now don't feel right. I should have gone easier that week after the marathon--maybe 30 miles with only one double-digit run.

My legs are trashed. My calves are extremely sore and basically shot. My right IT band and hamstring are uncomfortable. Something has gone awry in my right leg.

I think a few weeks of dialed-back mileage with minimal speedwork and tempo-running will help.

This week was really goofy as I chose to run lots of miles during the week because we were traveling on the weekend and I'd miss my long runs on Saturday and Sunday. Turns out I was able to get in a long run on Saturday morning before we hit the road.

The common theme for the week was, "damn, my legs feel trashed." Here's how the week went:

Monday
AM: 7 miles easy during lunch
I ran down MLK and back, fighting a very tight right hamstring. To top it off, I forgot my base layer and nearly froze my ass off as some nasty gusts came in off the lake. I might have gotten hypothermia had the rain picked up.

Tuesday
AM: 8.2 miles at 7:19 pace
I ran miles 5 and 6 at 6:48 pace. My right hamstring felt pretty tight. Finishing the run, I decided that I’d redouble my efforts to stretch it every night before bed.
PM: 6.85 miles at 7:41 pace during lunch
I ran in Shaker Park. Once again, my right hamstring was tight—almost like a drum.
Total miles for day: 15

Wednesday
AM: 8 miles at 7:39 pace
Snowing, sleeting, raining and very cold, making for awful weather. On the good side, my right hamstring was feeling better from last night's stretching.PM: 5 miles at 7:24 pace during lunch
Running late for a meeting, I hammered the last mile at 6:29.
Total miles for day: 13

Thursday
AM: 8.4 miles at 7:15 pace
Very cold—29 degrees. But my hamstring felt pretty good.PM: 5 miles at 7:24 pace
Felt like crap—sore, run-down and just trashed. It was at this point that I realized I had come back too fast from the marathon.
Total miles for day: 13.4

Friday
AM: 7 miles at 7:41 pace
As a result of my overdoing it, my calves were pretty well shot and my right hamstring tight as a drum (yet again). I forgot to stretch the night before—big mistake.

Saturday
AM: 14.5-mile long run
This very early-morning run (started at 5:25 a.m.) was on remote country roads near home. About halfway into the run, I stopped at the Shell gas station for a Gatorade and then headed home. I was pretty achy from the previous day’s flu shot, but this was a really fun, enjoyable and relaxing run through a very peaceful area of town.

I seriously doubt I'm getting to 4,000 miles for the year. I don't even know what my next race will be. It was to be the Fall Classic 1/2 Marathon, but it's hard imagining myself racing right now with shot legs. We'll see.

My goal for this week is to relax my mileage and avoid intense paces. Then next week hopefully I'll be feeling better.

Onward and upward!
Posted by Wyatt Hornsby at 8:12 AM