I really hate recovery weeks. I just want to run the way I want and not have to worry about going easy for recovery's sake. But recovery is a fact of life in distance running, and so I chose to go a little easy this week to give my hamstring some time to heal. 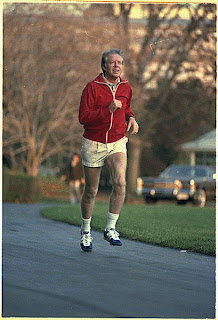 Jimmy Carter, recreational runner...as are, according to Glenn A., Mike Wardian, Yiannis Kouros, Scott Jurek and others since, like the former prez, they don't run for a living.
Monday
Post-Columbus Marathon rest and recovery

Tuesday
AM: 6 miles at 8:06 pace
I felt surprisingly good—fairly sore in the legs, but still strong. My hamstring was super tight.

Wednesday
AM: 6.5 miles at 7:49 pace
I was much less sore than the previous day, but was still nursing a hamstring that felt tight as a drum.

Thursday
AM: 7 miles at 7:35 pace
Getting stronger and feeling better, but not in the hamstring…

Friday
AM: 7.6 miles at 7:27 pace
Feeling recharged and geared up for a weekend of running, but still struggling with the hamstring.

Saturday
AM: 12 miles in Cuyahoga Valley National Park with the Southeast Running Club
This was my first time in Peninsula in a few months and man was it just what the doctor ordered. When I’m reeling from a stressful week (the stress mainly stemmed from the insurance company’s denial of Noah’s helmet, which means we’re going to have to fork over $5,000 out-of-pocket), a trail run through Cuyahoga Valley National Park is just what I need. About 9 miles into the run, which was going very well, I hit a root and went down like a sack of potatoes—no chance to brace myself for the fall. Mark G., who was running behind me, then tripped on me and went down, accidentally stepping on my leg. Everyone laughed, including me. Undeterred, Mark and I got up immediately and resumed running. I was a little scraped up, especially around my ankle, but I felt OK. Well, needless to say, the full effects of the fall didn’t arrive until the next morning…. My hip was badly bruised, my calf moderately strained and my ankle scraped up like someone took sandpaper to it. I guess that’s what happens when you’re getting old and take a fall.

Sunday
AM: 15 miles in Solon with the Southeast Running Club
I told Jeff U. during the run that it was scary how good I felt (sans hamstring) only a week removed from the Columbus Marathon. Usually the following Sunday I’m feeling like a bag of garbage, but not today. I averaged about 7:35 pace, getting in 2 miles beforehand, then completing the 12-mile loop with an extra one mile to make it 15 for the day.

Afterwards, we had breakfast in the bagel shop, where the trash talk went to new levels. I took some ribbing for my 2:59 at the Columbus Marathon. Apparently, I’m a sub-2:50 guy because I have "lots of talent." I don’t know if any of that’s true, but I do know I can get faster. Paul R., a former 4:18 miler, also took some ribbing as he gears up for a strong Richmond Marathon, where he looks to break the 3-hour barrier for the first time on what some guys say is a "short course." Nonsense! If Richmond were short, it wouldn't be a Boston qualifier.

Anyway, most of the bagel shop ribbing came from Mr. 24-hour American record holder Mark G., who said—and I quote—“breaking 3 hours in a marathon is a joke.” Really? According to a report of MarathonGuide.com, 1.7 percent of all marathon finishes in 2007 were under 3 hours. That means 98.3 percent of marathon finishes were above 3 hours. And breaking 3 is a joke? Try telling that to the hundreds of thousands of folks who came in above 3 hours. And while we’re at it, qualifying for Boston is a great accomplishment. About 15 percent of marathon finishes are BQs. I've known runners who've tried to qualify for Boston for years and they continue to fall short. For most, Boston is the crowning achievement for a marathoner. In SERC, Boston is expected and to not qualify is to underachieve.

But Sunday breakfast brought even more controversy. For his part, Glenn (a former 2:30something marathoner) claimed that anyone who doesn’t run professionally is a “recreational runner.” Needless to say, a few guys took issue with Glenn’s claim. It occurs to me that under Glenn’s definition the following individuals are recreational runners:

I guess Kyle Skaggs, Valmir Nunes, Hal Koerner, Anton Krupicka and others are "recreational runners," as well, since they don't do it professionally.

My goal for this week is to complete my recovery from Columbus, and then get back on the track to prepare for the Fall Classic Half Marathon. I’m going to use the Fall Classic as a measure of what my time at Columbus should have been. I ran a 1:22 at the Spring Classic last April and will be looking to best that time at the Fall Classic.