Doping: I Don't Know What to Believe Anymore

I'm about to wrap up Tyler Hamilton's new book, The Secret Race: Inside the Hidden World of the Tour de France: Doping: Cover-ups, and Winning at All Costs. Hamilton was a top lieutenant for Lance Armstrong, the celebrated cancer survivor and seven-time winner of the Tour de France. As we all know, Armstrong now faces a damning report by the US Anti-Doping Agency and may lose all seven Tour de France titles because of suspected doping. 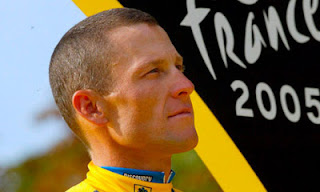 An admitted doper, Hamilton in The Secret Race chronicles his years with Armstrong and the US Postal Service team and his systematic use of illegal performance-enhancers. Throughout his 300-page autobiography, he shares disturbing information about Armstrong, including the seven-time Tour champion's purported use of synthetic EPO (EPO boosts red blood cells, which provide oxygen to the muscles), testosterone and blood doping. According to Hamilton, the USADA report and many other sources, Armstrong worked closely with the unscrupulous, albeit brilliant, doping doctor, Michele Ferrari. Ferrari has since been banned from pro cycling. Hamilton says Armstrong, aided by Ferrari, doped long before his battle against cancer and throughout his seven wins at the Tour de France from 1999-2005.

Other former Armstrong lieutenants, including George Hincapie, Floyd Landis and Levi Leipheimer, shared similar accounts in their statements to USADA. Hincapie was by Armstrong's side in all seven Tour wins.

The point of this post isn't to offer a book review or to share information and analysis that's already available for public consumption; it's to express my profound sadness. Like millions of people worldwide, Lance Armstrong was once a hero to me. I admired the way he competed, lived and expressed himself. I read both of his books cover to cover and found inspiration in his competitive drive. He brought me to the Tour de France and I've been an avid fan of pro cycling since (and I always will be).

As the years pass, I find it harder and harder to resist becoming a cynic when it comes to those we view as heroes. Are there any heroes left? Where are our Roy Rogers types? Over the past few years we've seen Tiger Woods, Joe Paterno, Barry Bonds, Roger Clemens, Marion Jones and many others fall from grace. Now, we see perhaps the most beloved figure in the history of American sports, Lance Armstrong, in the midst of a free fall like no other. Few could have predicted this, even as, deep down, many questioned the pureness of what they saw. I never really questioned it; I chose to believe in Lance. I was a fool.

Looking back on it now, I should have known Armstrong was a doper. Pretty much everyone around him was busted at some point in their career. How could it be that Armstrong, who conquered his opponents like no other cyclist could, was clean? While we continue to dismiss as no-good cheats disgraced riders like Jan Ullrich, Hamilton, Frank Schleck, Alberto Contador and many others, we've hailed the unbeatable Armstrong as a symbol of American righteousness, purity and might. Alas, the truth is this: Armstrong was no different than the cheats; he just hadn't been caught (yet). But now he's being exposed, and it's painful to watch because it's hard to let go of how we've felt about Lance for all these years.

The saddest message within Hamilton's book is that you have to dope in order to be competitive in the major events like the Tour de France. A clean rider might be able to compete in shorter races, but in a three-week event he'll have no shot, especially in the latter stages when one battles depletion. To be at the top of a sport of cheaters, you need not only lots of pasta and sleep, but also extra red blood cells and freakish recovery. Another disturbing message in Hamilton's book: Because everyone dopes, it's not viewed as cheating. Doping is seen as what you have to do to survive.

I've never taken an illegal performance enhancer and I never will. But now I look upon my own beloved sport and wonder how clean and honorable it is. You can't blame me for my cynicism; EPO, blood doping and testosterone would do wonders for an ultrarunner. There have been times, after a mountain run/race, when I've been depleted at a level far behind what I might otherwise experience in a sea level event. In these times, I do one of two things: either I push myself to break through, or I choose to recover the natural way (with diet, rest and legal supplements like Hammer Recoverite, Udo's Oil and whey protein powder). With the aid of EPO or a blood transfusion, I could probably recover ten times faster and be back at it in no time. I might even have a shot at winning a few races. I can resist such a proposition because it's immoral to cheat, but who's to say others are just as scrupulous...especially when money is on the line as we're increasingly seeing.

In a sport without any real drug testing to speak of, isn't it entirely possible--even likely--that performance enhancers have taken hold while we remain happily oblivious to the seedy underbelly of long distance running?

I don't know what to believe anymore.
Posted by Wyatt Hornsby at 7:00 AM

Email ThisBlogThis!Share to TwitterShare to FacebookShare to Pinterest
Labels: Cheating