Too Much Whining on Facebook...So Deactivated

Over the weekend, I deactivated my Facebook account. It has been quite surprising how many people have contacted me about it over the past two days, asking "where" I am.

For me, Facebook has always been a "necessary evil." As I've lived in 9 states over my life (Colorado will be the last!), it's been a great way to stay in touch with folks I care about....fellow runners, friends, past co-workers and of course family. But, lately, it's just gotten to be too much. Something tells me I am not alone in taking "a break."

Simply put, I am tired of logging on and seeing post after post from people whining about the outcome of the presidential election. I am very anti-Trump and proudly voted for someone else. But, even for someone like me, who opposes Trump to the core, the whining has been too much. And the non-stop whining is what led to my decision to pull the plug...for now. I am tired of people posting diatribes from non-reputable news outlets and pretending that said content is reputable.

I say "for now" (in reference to deactivating) because I am leaving the door for coming back to Facebook open, but it is also possible I will not. It is simply too upsetting to me to see friends yelling at friends, family turning against family, relationships coming to an end...all because of an election. I have not engaged in this madness--I have only watched it in horror. It is too much for me.

Many years ago, I worked political campaigns. Here's what I learned: Elections are won and lost. Sometimes your candidate wins. Sometimes he or she loses. If you're on the losing end, usually it's for specific reasons. Don't whine about it. Instead, figure out what went wrong, have a plan for addressing those failures going forward, get better people and learn from the mistakes so you don't make them again. But, above all, don't whine.

As runners, we don't take too kindly to whining. In races, as in life, stuff goes South. When that happens, you dig deep, get a plan, and keep going. When it hurts, it's OK to whine once or twice (under your breath). Hell, you can even shed a tear now and then (I did at Western States, when my race went to hell in a handcart coming into Michigan Bluff--and yet I finished). But whining and a flood or tears aren't going to get you to the finish line. What will get you to the finish line is a plan and "an inexhaustible supply of grit, guts and determination" (to quote Leadville 100 founder Ken Chlouber). That last thing--grit, guts and determination--is in short supply these days. I truly believe endurance athletes are leaders to the core.

In closing, I am glad I'm off Facebook. I do not miss it (at all). There are other places I can get updates on running...such as Ultrarunning Magazine, iRunFar, blogs, etc. And if I want to reach out to a pal, I can call or text him.

A final note..... My 2017 schedule is still coming together but as of now here's what it's looking like:
I would love to do a late spring 50-miler, such as Jemez, but it might be hard to pull that off with scheduling/family engagements.

Here's to a life without Facebook. We'll see how long I can hold out, but so far I'm liking it.
Posted by Wyatt Hornsby at 5:36 PM 3 comments: Links to this post

Inspired by fellow ultrarunner Andy Wooten, who is also an Aspen-based life coach, I embarked in October on an interesting challenge that was very much out of my wheelhouse: to complete 3,000 pushups in a single month. Andy completed this challenge in September. Intrigued, I decided to give it a whirl in October.

Unfortunately, I didn't get started with the challenge until October 3, meaning I went into it with a two-day deficit to make up. No worries! I love a challenge. I was able to quickly make up for the lost days and, in the end, finished the month with 3,110 pushups. My best day was 170 and my worst day--because of a sore shoulder that required rest--was 25. The average day saw 110-120 pushups over 4-5 sets.

I definitely got stronger as the challenge progressed and I put on some muscle, which might explain the three extra pounds I gained in October. By the midway point of the challenge, I found myself able to bang out 30 or 35 pushups with no effort. Here's how it all unfolded: 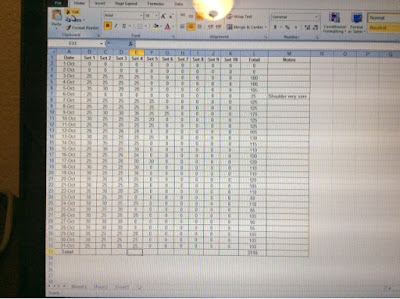 For November, why stop the challenges? So I'm kicking around the idea of 1,000 pushups and 2,000 crunches and have already started. I figure a thousand pushups should maintain the strength I gained in October. As for the 2,000 crunches, well, it would be interesting to see what that brings. Then, in December, I may do 1,000 weighted air squats, 1,000 pushups and 1,000 crunches. Life is about variety!

I have begun to kick around what races I may do in 2017. Earlier in the fall, I went through this phase where I actually considered signing up for the Tahoe 200-miler. I also looked at the Bigfoot 200, which looks insanely hard with over 100,000 feet of elevation change. While I am quite certain that at some point I will lace 'em up for 200 miles (my maximum mileage in one clip is 131 miles--what's 69 more?), I don't think 2017 is the year to do that. But when that time comes, I am thinking Tahoe will be the ticket unless some other intriguing 200-miler surfaces.

Anyway, as far as 2017, I am entering the Western States lottery as I desperately want back into "the Big Dance." I absolutely know I can improve on my 2016 time by 3+ hours--starting with going into the race fresh and not cooked from overdoing it at a race three weeks prior. But with one ticket in the lottery (had to start over after my finish in 2016), I have a snowball's chance in hell of being selected. If by some miracle I am drawn, then the spring and summer would be built around Western States.

The summer of 2017 is looking fun!
Posted by Wyatt Hornsby at 7:50 AM 2 comments: Links to this post