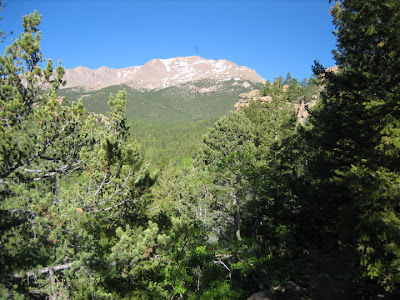 My Pikes Peaks summit adventure on June 6, 2010 was a disaster. It was a disaster because I expect so much of myself and I push myself very hard, and I am often able to will myself to achieve an objective, and yet on Sunday at Pikes Peak I fell far shot of my goal. A lot of people might be very proud to summit this incredible 14,115-foot mountain and call it a day. Not me. Yes, I am glad I made it to the top, grateful I had the opportunity to embark on this adventure, and blessed to have experienced such beauty (I mean, it was at Pikes Peak that "America the Beautiful" was written). But I feel very defeated knowing it took me 4.5 hours to summit the mountain and, with a bum ankle, I had to take the Cog Railway back down.

Have you ever gone into an adventure just kind of having maybe not the best feelings, like maybe this isn't your day? That's how I felt when I went to sleep on Saturday night and was driving in my car on Sunday morning down to Manitou Springs. Maybe it was due to a lack of sleep. The night before, we had a vicious thunderstorm that had our dog, Sophie, barking late into the night with every clap of thunder and every lightning strike. Then Noah woke up at 2something in the morning and it took us a lot of time to comfort him and get him settled back down. I woke up at 4:20 and was in the car by 4:50 a.m., zipping down I-25 south groggy but pretty excited. My goal was to start running by 6:15.

For the most part, everything went really well all the way up to treeline (about 12,000 feet). I started at 6:25 a.m., wearing a tight base layer shirt and a singlet, along with compression shorts, my Raceready shorts (for the pockets in which to store food), my Salomon Speedcross 2 trail shoes, a hat, and my 70-ounce Camelbak which I also had packed with extra Cliff bars, gels, etc. I also carried a water bottle and sported some protective gloves. I got a couple of delicious pancakes at Barr Camp ("paid" for via a donation), about 6 miles up, and went on my way, trudging along and enjoying the many incredible views that Pikes Peaks offers.

About 2-3 miles beyond Barr Camp--elevation of about 11,500 feet--I encountered a huge amount of snow that either covered a switchback or was beyond the trail--I'm still not sure. It took me about 20 minutes to get back on course and I'm not even certain how I found the trail. I was pissed--I had wasted precious time trying to find the trail.

After getting back on the trail, I realized that snow was going to be factor in my summit bid, and I knew that I had to pay very close attention to the trail or else I risked missing one of the many switchback you encounter on your way up. I kept trudging along, hitting all the switchbacks, and then finally came to the treeline elevation at about 12,100 feet. By now I was above the clouds and had just passed the famous A-frame house (photo below), which offers shelter. 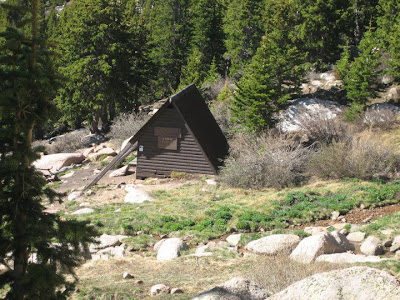 When you get above treeline, you're at an elevation where the oxygen is definitely very thin. I mean, trees can't grow here! At Pikes Peak above treeline, there's tundra, huge boulders, rocks and unGodly deep snow all around you. But at this point in the journey the most profound thing you see is the peak itself--a mammoth rocky mass with huge patches of snow all around it right there in front of you. It's gargantuan, and the summit is still so far up there. As you're now confronted with the specter of oxygen deficit, you don't know how you're going to get there. I think the Skyrunner, who passed me at about 13,000 feet to my amazement, is right--in a very profound way--when he says he doesn't look at the summit as he's going up; he just takes it one switchback at a time. If you focus too much on the summit with all those switchbacks and snowy areas in front of you, you're going to lose. 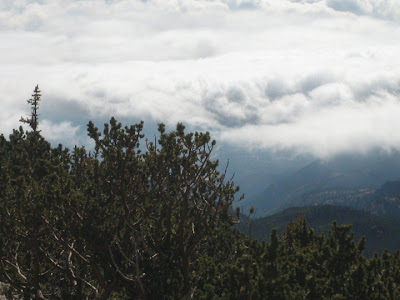 The snow above treeline was brutal. It was in isolated areas, making it kind of bizarre. When you weren't trudging through icy snow that felt like razor blades cutting through your skin, you were running in a stream caused by the snowmelt on the trail. You'd be running along a nice rocky section of the Barr Trail and then come upon a huge snowy patch you have to traverse. In some areas it was beyond waist-deep. My legs are very cut-up from the icy snow. It was also in the snow that I sprained my ankle. It didn't feel like a terrible sprain at the time, but as I was navigating the snow it hit me that I sustained a decent sprain. I wished I had trekking poles for this part of the journey. 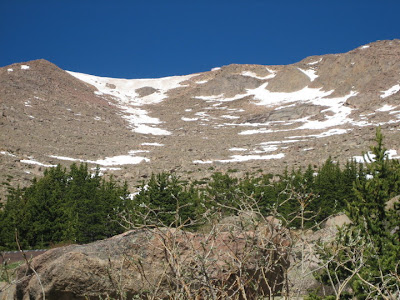 Going across snowy ridges on a huge mountain that reaches nearly 3 miles into the sky is a little on the frightening side. The photo above doesn't do the amount of snow on the mountain justice. The peak in the photo looks small. But it's huge and heavily textured with rocks and boulders and if you've been there, especially in May or June, you know EXACTLY what I mean. It's hard for me to admit it because I like to think I have some mojo, but there were areas above treeline where I was scared. I don't think I'd have been scared if there was no snow. The struggles through the snow unnerved me. At one point my phone came loose and tumbled down the snowy mountain. I nearly panicked because I was going to call Anne when I got to the top, and if I had no phone she wouldn't hear from me and might get worried. Then she'd start calling and would get no answer. What would she think then...that I was dead? I thought about how worried she'd be. I slid down the "hill," looking for my phone, and finally saw what I thought was my LG. It was just the leather case. I searched for my phone for about 5 more minutes--again, time wasted--and finally gave up. I crawled back up the snowy, icy "hill" to get back on the snow-covered trail and by some miracle found my phone in the snow on the way back up. I brushed it off and put it in my Camelbak, where it would be safe. Rookie mistake: When wading through snow at Pikes Peak, don't have your cell phone exposed. Pack it up! 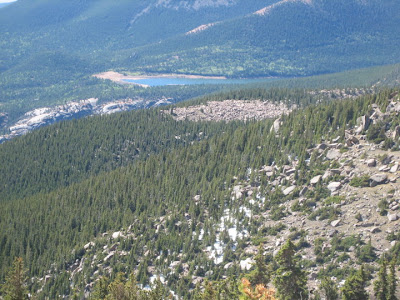 Notice the reservoir.
I felt better when I came upon another runner who was also struggling mightily. He had bonked and was also having a hard time in the snow. This was his third Pikes Peak summit. I asked him how he was getting back down and he said he was hitchhiking Pikes Peak Highway (the road that traverses the mountain all the way to the summit). By now I'd figured I'd run down the road, thinking it was just 15 or so miles. I felt that the trail was too snowy to get back down with my bum ankle and that the road was the safer, more doable option. But, in the more immediate term, I had to focus on getting to the top and then I'd worry about getting back down. By this time, Skyrunner was long gone, but I'd seen that he too had to stop and navigate carefully through the snow.

(In case you're wondering where photos of the snow are, I didn't take any. I was too busy trying to keep going and stay safe to stop and take photos. Also, by this time my camera was in my Camelbak and not possible to grab without taking off my pack--a risky proposition in high altitude situations where you're dizzy and your head is spinning, as mine was.) 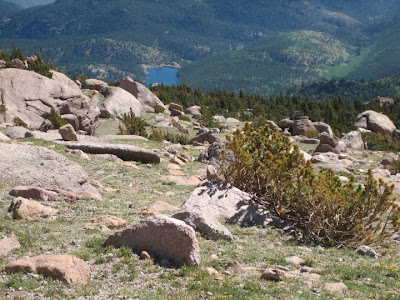 Sitting in the comfortable confines of my house, it now occurs to me what the biggest factor was during these final 2 miles of the adventure. Snow was a factor, indeed. But the biggest factor was the elevation. The elevation is what made the snow possible in June, and it also totally messed up my mind. I was lightheaded and not thinking straight. The snow seemed almost insurmountable, and it was hard to navigate, but in a more lucid state I would have done much better. I mean, I'm from Chagrin Falls, Ohio, where it snows 100-150 inches a year! I've gone on 20-milers in snow 12-18 inches deep. But Colorado isn't Ohio. At over 13,000 feet on a huge-ass mountain with more than 1,000 feet to go, it's hard to think straight and you can get rattled easily. 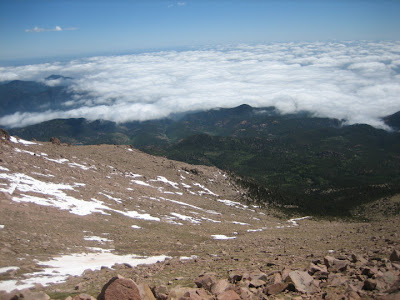 Probably the day's most dramatic photo.
I stayed with this other runner, whose name escapes me, for the final half mile. We "waded" through snow that went up to my armpits and used the rocks to pull ourselves out of it. On one occasion I got stuck in the snow. I pulled on a boulder and got myself out. Coming out of the snow, we'd encounter a clear section of trail and feel pure joy. Then, boom, more deep snow! It was exhausting. I think the last 2 miles took me 2 hours.

Finally, at about 11:07 a.m., we were at the summit. There the summit house stood--at 14,115 feet. The Cog Railway, which had just sounded its horn, was about to leave and I realized then, with my bad ankle, that I might need to inquire about the train, but I also thought I could handle a 15-mile run down on a dirt road. The ticket guy told me the road down was 20+ miles. A ticket on the railway down would cost $20. I had the money and they had a seat, and so I paid my way onto the train. This marked the first time ever I've aborted a major run. But I felt like I had no other choice. I had a sprained ankle that was popping with every step, the trail the last two miles was treachorous to say the least, and this was a mountain where you could lose your life if you weren't at your best. Pikes Peak is no joke, and it is to be respected and even feared. 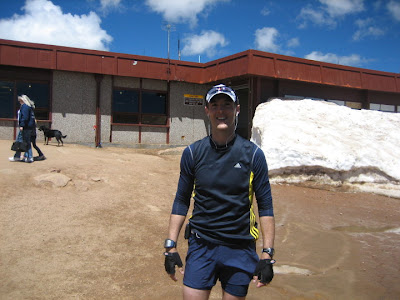 At the summit house, a smiling though defeated man.
Riding the train down, I felt like I'd failed. I've always loved challenges and usually come out on top. Not today. Pikes Peak kicked my ass. Yes, I made it to the top and, yes, I summitted my first 14'er, but not without great struggle and a defeated spirit.

It wasn't until later in the day that a friend told me I'd summitted Pikes Peak too early in the year. The best time to summit is July or August, when the trail isn't covered with snow.

So there you have it. Without doing enough research, I summitted the mountain too early in the year and paid the price for it. I can barely walk right now from my bum ankle and I feel like I got my ass kicked by a big mountain. I need to focus on getting my ankle healed before the Leadville Trail 100 on August 21. Lick your wounds and then get back in the fight.

I'm a warrior and always will be. Pikes Peak beat me on Sunday, but it will not beat me again. I will return and achieve my goal of summitting and running back down from that mountain in one piece. But next time I'll wait until July or August. July is only a few weeks away....
Posted by Wyatt Hornsby at 7:41 AM